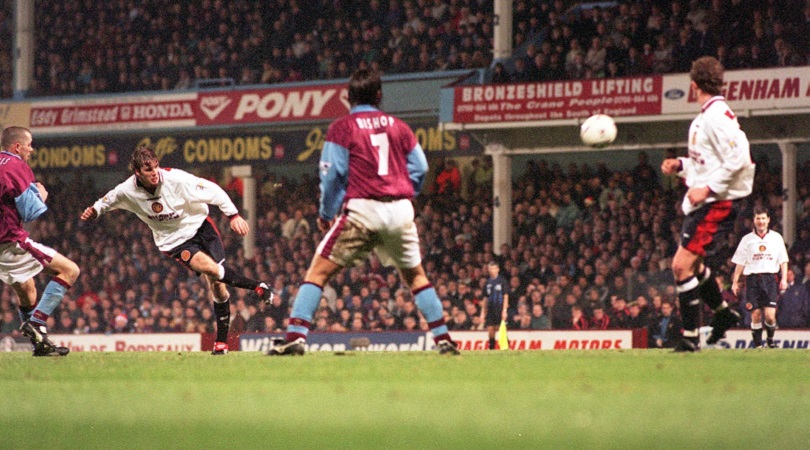 But the more we watch of the Premier League, the more we forget. Greats of the earlier days of this brave new dawn for English football have all been washed away but what followed; it’s certainly true that players are getting strong, faster, sharper, perhaps better overall – recency bias is not just real, it can all but erase some of the past.

With this in mind, we asked Seb Stafford-Bloor to compile his list of the most underrated, underappreciated, and frankly, forgotten moments of genius from the Premier League archives. The ones that don’t flash up every time the league is mentioned; the second or third-best moments you might not recall from a player.

In 30 years, it’s natural to lose a few memories here and there… but let’s not lose any of these.

“His first goal for Coventry City, will he ever get a better one?”

No he wouldn’t, Martin Tyler.

Why is this goal so rarely seen on British TV? It belongs in the Premier League’s title sequence until the end of time. We may reserve special affection for smooth technique and the finer parts of the game, but our shared guilty secret is that we all prefer goals of outrageous violence. This was that: a missile of a shot that might have killed someone but for the netting, after a barnstorming run from his own half.

Less under-appreciated, more just forgotten. Wallace actually won Goal of the Season in 1993/94 for this slaloming run, but it’s since been lost to the naffness of the times. Back then, Premier League Land was more a vague concept and less the opulent jewel it would become; the saggy goal-netting, Sky Sports’ ropey graphics and Tottenham’s horrendous, Space Invaders-influenced away shirts betray that.

Still: Rod Wallace! Regardless of era, football doesn’t get much prettier than this. It bears comparison with George Weah’s famous goal against Verona in 1996 and is arguably superior: Wallace’s path to goal was more cluttered, while the zig-zagging nature of his run meant he covered more ground. The finish, meanwhile, is almost impossibly smooth.

Yes. Yes you did, Rodney.

If there was a downside to Di Canio’s scissor kick against Wimbledon, it was that it normalised every other goal he scored in England. Rarely, if ever, has British football seen such a perfect split-second confluence of balance, timing and technique.

But this was his other side. If that more celebrated goal showed Di Canio’s technical execution at its finest, this was his imagination at work – and, perhaps, a more illustrative account of his brilliance. Di Canio could do wonderful things with a football, but he was also an impudent, original player who would try to change games in ways which wouldn’t even occur to others.

It was his talent which made him watchable, but it’s really his spirit that lingers.

Any number of Kewell goals could be on this list: his thunderous volley at Highbury would undoubtedly belong, as would his scorching drive across David James at Elland Road. But this is both top of the pile and, shockingly, largely forgotten. The outside of his left foot, the swaggering ease of his connection and the tip-of-the-hat from the crossbar… how can that be?

Kewell burned briefly but brilliantly and, before injury stole the best years of his career, there was a time when he was the most watchable player in the country. Certainly, there are few who have made scoring timeless goals look quite this effortless.

A caricature of an exotically gifted player, Carbone shimmered with Italian finesse – and never more so than at St James’ Park in August 1997.

This was a time when foreign players were still regarded as a novelty, dancing between the studs and elbows of what was still a relatively rugged league. Carbone, his hair in an alice band and his legs (reportedly) waxed, was an advert both for the increasingly cosmopolitan nature of English football and the competition’s growing modernity.

And what a goal, framed perfectly by the collective befuddlement of the Newcastle defenders.

He did. Had this been scored by a more famous player at a bigger club, it would have its own Netflix documentary.

This happened at a time when the sky was the limit for Huddlestone and when that next Glenn Hoddle tag wasn’t a punchline. A lack of mobility and suspect defensive awareness prevented him from reaching his expected levels, as did protracted injury difficulties, but his Tottenham career was still dense with measured passing and, occasionally, spectacular goals.

None were finer than this. Huddlestone didn’t kick footballs, he clubbed them: his striking technique generated awesome power, but was somehow still incredibly smooth – football’s equivalent of Roger Federer’s forehand.

The Hoddle comparison, therefore, had its roots not only in his vision, but also in the feel he seemed to have for the game and the ease with which he conquered technical complexity. The goal at the then-City of Manchester stadium was a vivid depiction of that, yet one which, like Huddlestone’s career, has regrettably faded over time.

Remember how football looked in comic books? Entire moves would be drawn in a single frame, with perfect passes and beautifully curling shots. Well, this was that.

By August 2002, Leeds had begun to sink into the financial sand. Players had started to depart, David O’Leary had been sacked and the team was under the guidance of Terry Venables. Part of the joy of Bowyer’s goal was that in stood in beautiful opposition to so much ugliness – Alan Smith’s pass into Harry Kewell, Kewell’s nonchalant flick into the path of Bowyer, and then the bending finish away from Russell Hoult and into the top corner.

It was an artist’s impression of the game, all perfect lines and improbable timing.

A moan: Beckham’s halfway-line goal at Selhurst Park is overplayed, but that’s irritating because it’s been allowed through repetition to become his apex moment. It was novel, opportunistic and really well executed, but – artistically – not a patch on the goal he would score at Upton Park four months later.

West Ham were a gritty, obdurate team under Harry Redknapp and the East End was often where the big teams had their bones rattled – what else would you expect from a side that included Julian Dicks, Iain Dowie, John Moncur and Slaven Bilic among its number. But this? This was a delicate flourish in the December rain: a beautiful goal which gently kissed Ludek Miklosko’s post on its way in.

Maybe worth including for John Lukic’s helpless expression alone.

Because he was succeeded by Thierry Henry, Wright isn’t often remembered for his finesse – but he did have this in his locker. Search through his back catalogue and see: his chip at the County Ground against Swindon and his lofted finish over Bryan Gunn at Carrow Road are, in particular, reminders of the breadth of his goalscoring talents.

But this was his masterpiece: a vivid show of his imagination in attacking positions and a gentle sand-wedged finish that left Lukic rooted and the hapless David Wetherall in knots. Wright bubbled with energy during his peak; a vivacious forward who prodded, antagonised and infuriated opponents. But this was his playful side – and a goal which deserves to be referenced far more often than it is.

By the end of May 1997, Middlesbrough had been relegated – “by men in grey suits” as Brian Robson would later describe their notorious points deduction.

The month may have ended with tears at Elland Road, but it began with spritely joy at Old Trafford: if that 3-3 draw characterised Boro’s flaws (losing a 3-1 lead), it showed them at their very best, too.

After 20 minutes, a flowing, free-form move, with combinations between the high-priced imports (Ravenelli, Emerson) and the industrial-but-emboldened natives (Phil Stamp, Robbie Mustoe, Craig Hignett), cut Manchester United to ribbons on their own turf, before Juninho opened his body and left Peter Schmeichel on his backside.