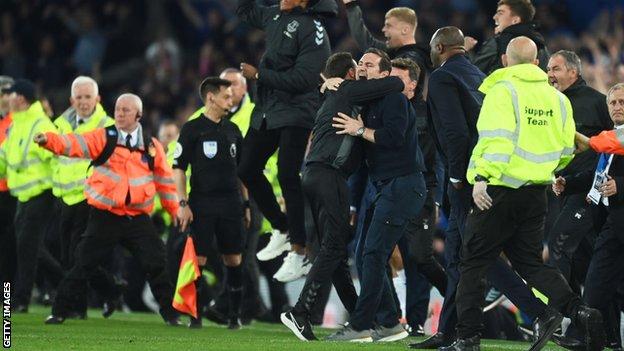 Everton fans have had their nerves shredded this season, so it was no wonder there was a huge outpouring of emotion when the team secured their Premier League status in the most dramatic of fashion.

Following Dominic Calvert-Lewin’s winner against Crystal Palace, one fan ran across the roof in front of the executive box with a smoke flare, another did it in his pants at full-time. Even manager Frank Lampard was soon on there.

The scenes were as if Everton had won the title, something they last did in 1987.

But they spoke of relief following a tortuous season where relegation would have had massive consequences for a club struggling with £372m of losses over the last three years, having suspended some of their sponsor contracts and who have to pay for a move into a new stadium in 2024.

Everyone connected with the club knew what was on the line, including Lampard who has previously spoken of how survival would match his Premier League title wins as a Chelsea player.

Dropping out of the league while city rivals Liverpool are attempting to complete a quadruple would have made the fall so much greater.

“It is one of the greatest moments of my footballing life and career,” Lampard said of keeping Everton up. “I have been very fortunate to have amazing times, especially at Chelsea as a player and a coach. But when you feel the feelings and desperation of what relegation brings to the table, it is different.

“You know what, come and work at this club for a few months and see the difficulties and what it means to people to stay in this league.

“It is a special night in Everton’s history.”

Those feelings have been clear to fans over the last month when they have turned up early to greet the team bus on its way to Goodison Park and create a carnival atmosphere. They were clear at full-time when thousands poured onto the pitch, and were loudly clear when they were still singing down Goodison Road while Lampard spoke in his post-match news conference.

In many ways they deserve it for their efforts in helping a struggling team.

“Why can’t we just win 3-0 rather than having to go two goals down first,” said one supporter amid the chaos following the comeback against Crystal Palace.

But tension and anxiety during matches where poor first halves have led to second-half resurgences have been commonplace.

Against Newcastle, a protestor had tied himself to a post and Allan had been sent off before Alex Iwobi scored a 97th-minute winner, which sparked wild scenes. Against Leicester, Richarlison dug out a 90th-minute equaliser, to offer another adrenaline surge.

The Brazilian also scored the winner against Chelsea in a match featuring two superb saves from Jordan Pickford.

And in the final act, where the mood was bitter during the first half against Patrick Vieira’s side, Calvert-Lewin’s 85th-minute winner inspired the type of celebrations which will live long in the memory.

However, there was a sour note during the post-match pitch invasion, when Palace manager Vieira was involved in an altercation with a one supporter who had run on to taunt him.

It came on the same night footage on social media appeared to show Swindon players involved in a confrontation after their League Two play-off semi-final win, and just hours after a Nottingham Forest fan was jailed after running on to a pitch and headbutting Sheffield United captain Billy Sharp.

Lampard said he felt for Vieira but that the overriding emotion behind the pitch invasion was “pure elation”.

“It was a special moment for the football club and I think if done in the right way, let them stay on the pitch and enjoy it for a bit as long as everyone’s behaving,” he added.

“Let them have their moment, it’s what football is all about.”

Once the celebrations have died down, there will be a determination to ensure the club moves forward and never dances with relegation so closely again.

The fact they have come so close despite owner Farhad Moshiri spending more than £500m on players since he first bought shares in Everton in 2016 points to the work that needs to be done.

“It has been a hard season but we are so proud of how the club has come together the last six weeks and built a platform to make sure it never happens again.

“We’ve had our mentality questioned and how much we care. It hurt. We care about this club more than anything else in the world. We have let the fans down a lot this season. But you could see out there what it means to all the players. We did not want to take this club down.”

After a stressful three and a half months in charge, Lampard can at least relax on Sunday against Arsenal, who will be chasing a top-four place.

But he alluded to the rebuilding job needed to try and restore some pride after a bruising season.

“Now is the time to take stock, enjoy the moment and then make sure we are not here again next year, because there are reasons for it,” he said.

“We have to find every way to improve the squad, the club and ourselves.

“Everton fans can know as long as we are at this club myself and the staff will give everything.”