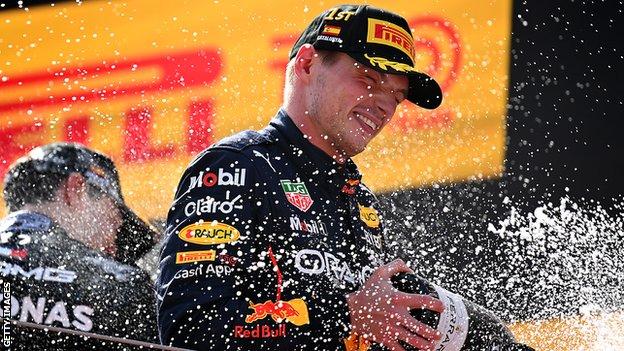 It was the sort of race on which championships often turn.

Ferrari’s Charles Leclerc was running away with the Spanish Grand Prix, and looking at extending his lead in the title race back to the margin of a clear race victory. But then his engine failed and the race fell into rival Max Verstappen’s lap.

Well, it was a bit harder than that for Verstappen, who endured a spin into the gravel and 20 laps stuck behind George Russell’s Mercedes before he and his Red Bull team managed to work their way back to the front.

But the upshot was that instead of falling back further adrift of Leclerc, Verstappen now has a six-point lead at the top of the standings, which he tops for the first time this season.

Not only that, but the statistics look grim for Leclerc and Ferrari.

Verstappen has retired twice this year, but has won every race he has finished. This was his third victory in a row. And whereas before reliability had been the big question mark over Red Bull – and still is to some extent – now Ferrari face their own questions.

Meanwhile, there is a complicating factor in what had until Barcelona been a private fight between the two men. Mercedes look like they are back – or at the very least heading very quickly in that direction.

After a difficult start to the season with a recalcitrant car, suddenly both Russell and Lewis Hamilton look like they could start making life difficult for Verstappen and Leclerc.

Hope despite the disappointment for Leclerc

Leclerc’s retirement, with an unspecified engine problem, came shortly before half-distance in a race that appeared long before to have surrendered to him.

He and the Ferrari were in blistering form all weekend. The team took their first major upgrade of the season to Spain, and it worked exactly as expected. Leclerc spun on his first lap in final qualifying but, cool as a cucumber, nailed it with his second and took his fourth pole of the season.

After holding off Verstappen on the run to the first corner, he was two seconds in front of the Red Bull when the world champion made a most uncharacteristic mistake and spun at Turn Four – two laps after Leclerc’s team-mate Carlos Sainz had done the same. That looked like game over, and it would have been.

While Verstappen struggled with a faulty DRS overtaking aid to pass Russell’s Mercedes, Leclerc did a very impressive 21-lap stint on the soft tyres before his pit stop – eight further than Russell and Verstappen – and was building his lead again when he cried into the radio: “Oh, no,” letting the team know the engine had gone.

It was brutal for Leclerc. And while Verstappen has retired twice this season, the difference is that his failures came in races in which he was already well beaten by Leclerc. This cost the Ferrari driver a victory. From looking like equalling the win score at three-three, it is now four-two to Verstappen.

Considering that, Leclerc was remarkably phlegmatic after the race.

“Let’s say that I feel better after this weekend than I felt after the last two weekends,” he said.

“Of course, there is this issue we had on the car and I am very disappointed, but on the other hand there were plenty of positive signs other than that throughout the whole weekend.

“Our qualifying pace; the new package worked as expected which is not always a given, and everything was working well; and our race pace and tyre management, which in the last two races we have been struggling quite a bit compared to Red Bull and today it was strong.

“So, in those situations, it is good to also look at the positives and there are plenty.”

Among them was his driving. The Ferrari is not an easy car. It’s quite “pointy” and the rear needs careful treatment, characteristics which are at the root of the difficulties his team-mate Sainz is having this year, but Leclerc – more at ease with oversteer – is revelling in it.

As the two men sat with team boss Mattia Binotto in Ferrari’s post-race news conference, Sainz said: “Charles is doing an excellent job with this car.

“He is driving at a very high level, he is putting together super-impressive lap times, an impressive way of driving, and I can only admire and try in some ways to copy and try to put it a bit more to my liking to be faster.”

The Ferrari excelled in the medium- and low-speed corners at Barcelona, which is normally a sign that a car will be strong in Monaco, where F1 reconvenes this coming weekend.

It is Leclerc’s home race. He was on pole there last year but has never finished the grand prix in three attempts in F1. He badly needs to break that streak with a win on Sunday.

A bit of needle appearing at the front

Verstappen’s spin made life difficult for him, but once Leclerc was out the race looked like his to lose.

Although his DRS problems meant he could not pass Russell, Red Bull had two cars against Mercedes’ one, and switching Verstappen on to a different strategy was always likely to work.

Once Verstappen was in clear air, he could use his car’s pace, and when Russell emerged from his second stop, he did so behind Verstappen. Red Bull now just needed to order his team-mate Sergio Perez out of the way after Verstappen’s third stop, and the one-two was in the bag.

Still, Verstappen had his own concerns after the race.

“We have to be realistic,” he said. “Without Charles’ retirement, he probably would have won the race so we have to keep on working to make sure we try and improve the car.”

Meanwhile, there is a bit of needle appearing in the fight between Red Bull and Ferrari.

Two weeks ago in Miami, Ferrari team boss Binotto questioned how Red Bull were able to make so many updates to their car while staying within the $140m budget cap.

This time, Binotto noted with interest Red Bull managing to get Verstappen out of the garage only 20 seconds before the pit lane closed before the race.

Red Bull said this was “some last-minute tests on the DRS”. But they were also seen heating up their fuel in the garage.

Binotto admitted he did not know what was happening, but he did say: “I can imagine it was down to the fuel temperature in the tank, which needs to be a maximum 10C below ambient.

“Per regulations, it should be at all times during the event, so not only when the car is going out but in the garage itself.

“For me, it is difficult to understand that they were maybe heating up the fuel through a fire. But I can only trust the FIA and I am pretty sure they are comfortable and they checked and maybe that is not the right explanation as well.”

A spokesman added that it was all right for the fuel temperature to be lower than permitted in the garage, as long as when the car left the garage it was legal.

The race marked a breakthrough for Mercedes, following the introduction of new parts aimed at solving their biggest problem this year – the excessive ‘porpoising’ or bouncing they have been suffering on the straights.

The parts worked, the porpoising was much reduced, and Russell produced the team’s best qualifying performance of the year in fourth.

His Mercedes lacked the pace of the Red Bulls and Leclerc, but he was highly impressive in his defence against Verstappen, especially a moment when the lead appeared to be lost as Verstappen dived for the inside at Turn One, only for Russell to keep the position by braving it out around the outside, and then ushering him to the edge of the track around Turn Three.

Russell said: “We have probably halved the gap to the front-runners, compared to the rest of the season. And I think we know there’s probably more performance to find.

“It’s been a season of problem solving, as opposed to trying to find more performance. I think we’ve now finally solved our issue. And we can now focus on bringing more performance. So yeah, we’re six races behind but there’s no reason why we can’t claw this back.”

Hamilton, meanwhile, sixth in qualifying, had yet more bad luck when he was hit by Kevin Magnussen’s Haas on the first lap and suffered a puncture. But his race after that was outstanding.

He emerged from the pits after a change of tyres 54 seconds off the lead. That gap was down to 40 before he had to back off in the last couple of laps to protect an engine which had lost all its coolant. It was arguably the drive of the race.

Hamilton, who two races ago was writing off the season, has now set his sights on winning before too long.

“Definitely,” he said. “This is a great sign we are going in the right direction. If I hadn’t had that [issue at the start], I would have been fighting with the Red Bulls.”

“I’ve seen a race car that reminded me of the race cars of previous season when you are 30-plus seconds behind the whole field and come all the way to the front and get a podium,” he said.

“It is very encouraging and shows we’ve made another stop.

“Can we fight for the world championship? We bet we can, but we just need a car that can finish first and second and we have reasons to believe we can get there.

“The odds are against us but motor racing is a different ball game. We saw Ferrari didn’t score a lot of points although they should. We are absolutely pushing flat out to bring us back into the game.”