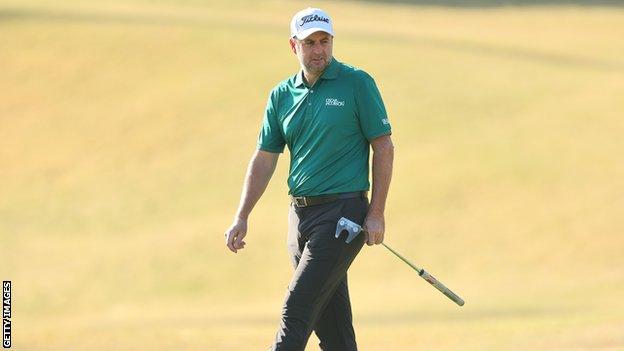 England’s Richard Bland is four shots off the lead at the Valero Texas Open as he chases a spot at the Masters.

The 49-year-old, who has never played at Augusta, carded a three-under-par 69 to move to six under, while fellow Englishman Aaron Rai is on seven under.

Americans Brandt Snedeker, Beau Hossler and JJ Spaun and South African Dylan Frittelli are tied for the lead on 10 under after the third round.

The winner will qualify for the Masters, which starts on Thursday.

Scotland’s Martin Laird and Russell Knox and England’s Luke Donald are on four under.

Bland missed out an automatic invite to the first major of the year when he lost in the quarter-finals of the WGC Dell Technologies Match Play last week and failed to break into the world’s top 50.

He is playing in Texas on a sponsor’s exemption.

Last year the world number 53 won his first European Tour event at the 478th attempt with victory at the British Masters.

He then played in the US Open for only the second time in his career and became the oldest man to lead the tournament at the halfway stage before finishing in 50th place.

His renaissance has continued this season as he lost in a play-off to Norway’s Viktor Hovland at the Dubai Desert Classic in January.