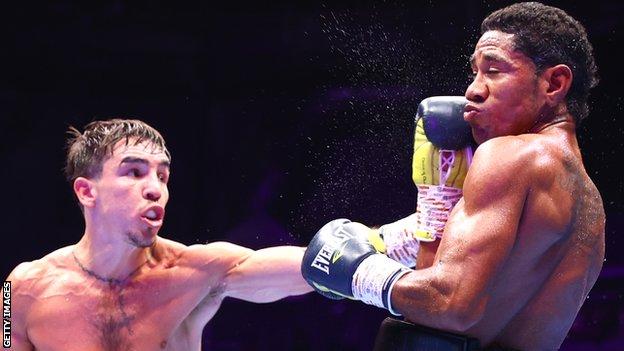 Michael Conlan returned to winning ways at the SSE Arena with a comprehensive unanimous-decision victory over Colombia’s Miguel Marriaga.

The Belfast featherweight scored three knockdowns on his way to a comfortable win in his home city.

Conlan controlled the fight and withstood a late onslaught from Marriaga in the final round.

The 30-year-old was making his comeback after the knockout defeat by Leigh Wood in a WBA title showdown in March.

After a timid opening couple of rounds where both Conlan and Marriaga were playing cat and mouse, trying to work each other out, the hometown hero began to get a foothold in the fight.

Conlan utilised his lead right hook well from the southpaw stance, luring Marriaga in before landing the backhand left cross on numerous occasions.

He continued to move his head well, landing scoring shots before getting out of range of the three- time world title challenger’s combinations.

Into the sixth round and Conlan’s superior jab was beginning to tell. Holding his hands low, continuing to move his head brilliantly, the Olympic medallist peppered the face of Marriaga, snapping his head back on numerous occasions and bamboozling him continuously.

With the rounds ticking by and Marriaga becoming more desperate, Conlan scored a superb knockdown in the seventh round.

The lead right hook was the shot that sent the Colombian tumbling to the canvas, and the Belfast crowd into raptures. Conlan’s lightning jab was setting up opportunities for his clubbing shots to land.

The second knockdown came in the eighth, where Marriaga went down after a flurry of explosive shots landed. The following round, the Irishman produced his third knockdown of the contest, landing a ferocious back hand right on the button.

Marriaga, who has scored more knockouts than Conlan has had fights, was beginning to tire. Despite the late barrage he came up short.

There was also stellar undercard action including Padraig McCrory’s knockout win over Marco Periban. McCrory is only the second person to stop the Mexican, alongside former IBF world super-middleweight champion James Degale.

Tyrone McKenna and Chris Jenkins put on a real show for the fans, trading leather for 10 gruelling rounds, with McKenna getting the nod on the three judges scorecards.