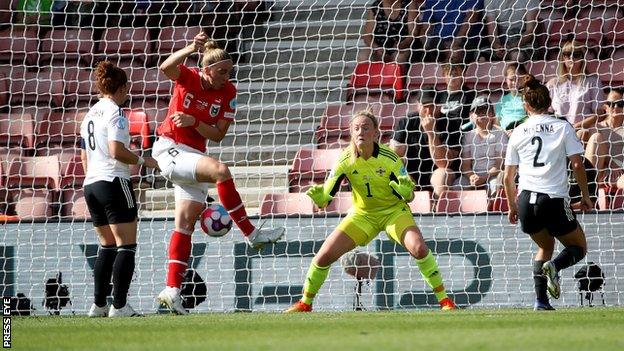 Northern Ireland are on the brink of an early exit from Euro 2022 following a 2-0 defeat by Austria in Southampton.

Katharina Schiechtl touched home Sarah Puntigam’s deflected free-kick on 19 minutes to give Austria the lead in their second Group A match.

Northern Ireland, playing in their first major tournament, grew in confidence as the game progressed but struggled to break down a stern Austrian defence before Katharina Naschenweng’s late second goal secured the win.

The fate of Kenny Shiels’ side could be sealed in the 20:00 BST kick-off between Norway and England, where Northern Ireland will be knocked out if the Norwegians do not beat the hosts.

Victory for Austria keeps Irene Fuhrmann’s in the hunt for a quarter-final place before their final game with Norway on Friday.

Out of Northern Ireland’s three Group A fixtures, Austria was tipped as the most realistic chance for them to get a result on their Euros debut.

The sides drew 2-2 in World Cup qualifying in Belfast in October, with Austria netting an injury-time equaliser, before Fuhrmann’s side won the reverse fixture 3-1 in April.

In fearsome heat, with temperatures hitting as high as 27C, it was the favourites who made a brighter start in front of a 9,268-strong crowd when Julia Hickelsberger-Fuller headed the ball across the face of goal and Nicole Billa, unsighted, could not react and divert the ball home.

Hickelsberger-Fuller, the standout player in the first half, then fed her Hoffenheim team-mate Billa after some superb work but, just when it looked like the net would bulge, Sarah McFadden raced across to do enough to put the forward off and the ball hit the side netting.

Without the injured Simone Magill, captain Marissa Callaghan was tasked with playing a ‘false nine’ role, and, while Northern Ireland struggled without their central outlet, the pace of Lauren Wade caused the Austrians problems and her long-range effort was held by Arsenal goalkeeper Manuela Zinsberger.

However, the pressure from Austria kept coming, and the breakthrough arrived when Demi Vance fouled Hickelsberger-Fuller on the edge of the area. Puntigam’s low free-kick took a touch off Julie Nelson, who was on the end of the two-player wall, and Schiechtl evaded her marker to guide the ball home in the 19th minute.

Kenny Shiels’ side worked their way into the match against a team 26 places higher in the world rankings and had their first major chance when Callaghan collected Vance’s pass, spun her way into the area before being foiled by Austria defender Carina Wenninger.

That marked the start of a strong spell for Northern Ireland, however a succession of set pieces failed to lead to any clear-cut chances.

Northern Ireland were then caught out playing from the back when goalkeeper Jackie Burns gave the ball away to Barbara Dunst following Rebecca McKenna’s backpass.

However, Burns raced back and tipped the winger’s effort onto the top of the crossbar with a brilliant recovery save and the half-time scoreline was a fair reflection of the game despite Northern Ireland’s growing confidence.

With the sweltering conditions it was almost inevitable that play would slow down in the second half, and it was Austria who started quickly when Dunst cut inside but her shot was blocked by Nelson.

However, it was not long before Northern Ireland grew in confidence and Wade’s looping effort went over the bar after Chloe McCarron did well to win the ball on the edge of the area.

But Austria, who reached the semi-finals in 2017, used their big-game experience to move back onto the front foot and Dunst’s well-taken shot from the edge of the area was spilled over the bar by Burns.

Rebecca Holloway, one of four fresh faces from Thursday’s opener with Norway, then pulled off a heroic block on Laura Feiersinger as the game began to open up.

Rachel Furness headed over moments after McGuinness’ cross was well smothered by red shirts, and from there Austria began to exert control and boss possession as fitness told.

After earlier firing straight at Burns, Nascheweng got the better of the NI keeper at the second time of asking with a powerful effort that rifled into the net, securing victory with four minutes remaining.

Another Holloway block stopped Austria adding a third when she denied Puntigam in injury time.

There was a contrast of emotions at full-time as the white shirts of Northern Ireland sank to their knees, while the Austrians joined their support in a victory song and dance as they kept their dreams of progressing alive.

Northern Ireland’s players still embraced their families and friends before departing the St Mary’s turf, but it looks like the ultimate underdog’s journey is set to end in the group stages, with their final game against England on Friday.