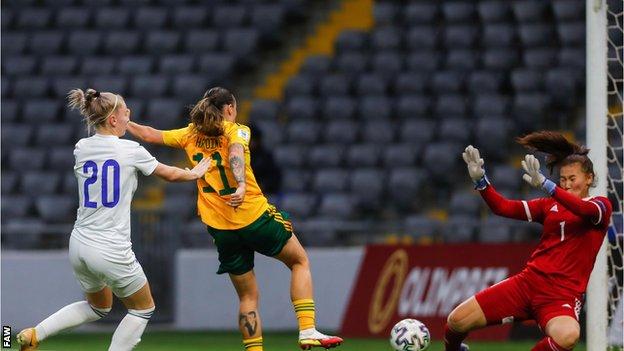 Harding becomes Wales’ eighth centurion and is the fifth women to win 100 caps.

The Reading captain scored from close-range to put Wales 2-0 ahead just before the interval after her strike partner Kayleigh Green’s opening goal.

Wales were in cruise control after half time and added a third goal as Jess Fishlock smashed the ball into the net.

The victory for Wales keeps their World Cup qualification hopes in their own hands, with Wales chasing a runners’ up berth in Group I to ensure a play-off spot, as Wales’ women chase a first major tournament appearance.

Wales can guarantee second spot with victories over Greece and Slovenia in their final qualifiers in September.

This qualifier was a momentous one for Harding, who was visibly emotional during the Wales national anthem and wore her heart on her sleeve throughout the contest, reacting angrily to a bad tackle on her and showing extreme delight at getting on the scoresheet.

This was a must-win game for Wales’ aspirations and manager Gemma Grainger made only one change to the side beaten 2-1 by France with Green recalled after suspension in place of Carrie Jones.

Grainger kept faith in goalkeeper Laura O’Sullivan, despite her error that led to France’s winner in Llanelli, with the goalkeeper able to watch as Karina Zhumabaikyzy’s cross hit the roof of the net on eight minutes.

Wales initially struggled to impose themselves against a stubborn home defence, but they did find some space from a well-worked set-piece routine on 14 minutes, but Rhiannon Roberts shot straight at goalkeeper Nazym Ismailova from Angharad James’ floated freekick.

The hosts would have been delighted to restrict Wales to such a degree, but their hard work was undone on 30 minutes with Green justifying the faith Grainger showed in her.

Sent off twice in qualifying and with Jones impressing against France, it was far from certain Green would be recalled, but her fantastic finish justified her selection as she turned and found the corner of the net after Sophie Ingle and Angharad James combined.

The goal lifted the pressure off Wales who looked like scoring a quickfire second, but they missed a series of chances as Green headed over, Harding fired wide and Sophie Ingle’s shot through a crowd just missed the upright.

However, they got the second goal they sought before the break as Ceri Holland’s pinpoint cross found Harding at the back post who applied a cool finish after beating the offside trap.

The second half was comfortable for Wales who were enjoying almost 80% possession, with Fishlock adding a third on 65 minutes as she slammed home right-footed, across the goalkeeper, after another well-weighted James through-ball.

A fourth goal for Wales and another for Fishlock was beckoning when the OL Reign forward went clear on 75 minutes, but she passed instead of shooting herself and Harding’s effort was deflected wide, while defender Gemma Evans’ late header was held by Ismailova.