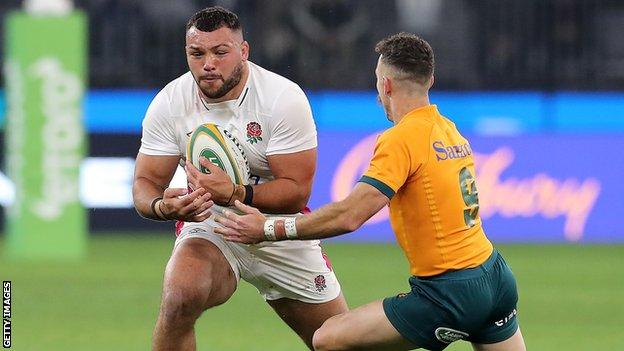 Prop Ellis Genge says England need to be “better everywhere” in the second Test against Australia.

Guy Porter and Tommy Freeman will make their debuts in Brisbane, while Jack van Poortvliet will make his first start.

Genge said England underestimated their opponents in the first Test.

“I was surprised and thought they were better than what we perceived they were going to be. That was probably a bit naive on our part. Good for them,” he said.

A fourth change for the second Test will see Sam Underhill replace Tom Curry, who has been ruled out of the tour because of concussion.

Despite scoring two late tries, England lost 30-28 against a 14-man Wallabies side in Perth in the first Test.

“I don’t think we were miles off it. They were good, really good, and at the top level you get punished for being off anything,” Genge said.

“Everyone’s questions are loaded towards: ‘Are you going to be up for the next game?’ Course we are. We want to win. We’re going to be fired up for it.”

The 27-year-old, who has recently rejoined Bristol from Leicester, will be up against against Taniela Tupou in Brisbane after the Australian tight-head missed the first Test because of a calf injury.

“I love playing against the best tight-heads in the world. I have never played against him, I have never met him. I have seen his highlights reel from when he was 16, everyone has. He’s a big lump,” he said.

We are going to have patience – Lawes

Meanwhile England captain Courtney Lawes says “patience” will be required while the side are “developing as a team”.

“Just because we have a new team and a new strategy, and are trying to find our DNA as a team, because we’ve got so many new players doesn’t mean that we don’t feel like we’re good enough to beat Australia. We certainly do,” said Lawes.

“We’re going to do everything we can to make sure we win the series. But at the same time, yes, we’ve had the conversation that we’re making these changes for a reason.

“We think it will open up our potential and we’ll be a better team for it. Maybe not now, it’s going to take time to get there and we are going to have patience.

“We are going to go through ups and downs, that’s for sure. But as long as we’re building towards an end product which is in the forefront of our minds, that is the main thing for us.

“Off the field we’re as tight a team as I’ve ever been a part of in an England jersey. That is 100% genuine. Because of that we’re all on the same page.

England must beat Australia at the hosts’ favourite venue to stop the Wallabies claiming the inaugural Ella-Mobbs Cup.

Australia have rattled off 10 successive victories at Brisbane’s Suncorp Stadium, including three against South Africa, two against France, two against New Zealand and one against Ireland.

England were the last team to defeat the Wallabies there when they triumphed 39-28 in 2016.

England suffered their heaviest defeat in Test history at the venue – a 76-0 mauling in 1998.