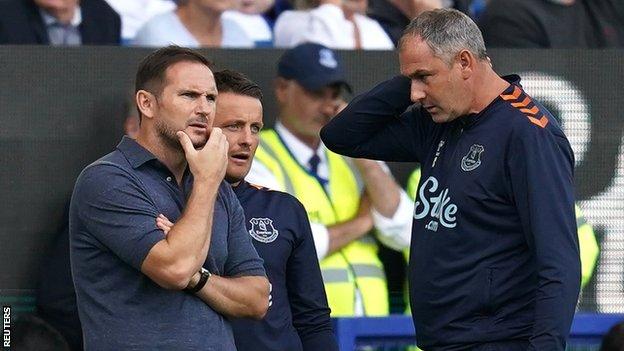 The last thing Everton needed after scraping over the line to survive at the end of one season, was to leave themselves hostages to fortune at the start of the next.

Everton did plenty right despite starting the season with a 1-0 defeat at home by Chelsea, but an avoidable flaw was brutally exposed at Goodison Park and must be addressed instantly.

The sale of Richarlison to Tottenham for £60m was an inevitable consequence of last season’s struggles, the talisman who did so much to keep Everton in the Premier League understandably seeking a higher stage on the Champions League.

Everton’s backroom team, and a board who claim they have learned the lessons from their own ruinous mistakes and transfer policies, would have been well advised to have lined up the Brazilian’s replacement in swift order, shortly after his departure for north London at the very latest.

The need is now even more urgent as Salomon Rondon looks a spent force, while Dominic Calvert-Lewin’s increasingly concerning injury record should have had alarm bells ringing after starting only 15 games in all competitions last season.

Everton’s failure to act was punished when Calvert-Lewin suffered a knee injury in training days before the start of the season that rules him out for six weeks.

It is hardly a catastrophic length of absence but Everton simply cannot afford a false start to this season after the horrendous struggles last term.

And how the weakness showed as Lampard was forced to play Anthony Gordon in an unaccustomed attacking role, banging his head fruitlessly against Chelsea’s defensive brick wall of new signing Kalidou Koulibaly and Thiago Silva, whose experience ensured the talented youngster was no match for them.

Everton showed energy and application and certainly demonstrated enough in spells to alleviate at least some of the pessimism of their supporters, but there was an air of resignation around Goodison Park once Jorginho’s penalty put Chelsea in front deep into first-half stoppage time.

Everton boss Frank Lampard’s side never gave up, but the lack of serious threat was as obvious as it was unsurprising and the markets must be scoured with urgency – maybe they even stretched to a chat with Chelsea opposite number Thomas Tuchel about talented striker Armando Broja in the bowels of Goodison Park post-match?

These are crucial weeks for Everton, with a board – led by chairman Bill Kenwright – and owner Farhad Moshiri asking a critical fanbase to judge them at the end of this transfer window.

How they deal with this striker emergency and other aspects of recruitment will form part of that judgement after a much-touted “strategic review” at the end of last season, the specific results of which seem vague, and currently looks very much like a case of those who have made Everton’s previous errors marking their own homework.

Will it actually bring about change? Time will tell.

Business has been done so far this summer and will continue to be done, evidence of which was on show at Goodison Park against Chelsea.

James Tarkowski, a smart free transfer signing from Burnley, was excellent in defence although it was a harder day for another Everton debutant, his former Turf Moor team-mate Dwight McNeil, who struggled to make an impact and was substituted.

A big positive was the sight of Lille’s talented 20-year-old midfield man Amadou Onana walking towards the directors’ box during the first half, acknowledging the warm applause he received. Lampard understandably urged patience but this is a big talent and, at £33m, a serious investment.

Idrissa Gueye is on his way back to Everton from Paris St-Germain to add his steel and discipline in midfield while Wolverhampton Wanderers captain Conor Coady may find his phone running hot after two desperate injury setbacks in defence.

Ben Godfrey fractured his fibula challenging Kai Havertz and Lampard said he will be out “for months” – an injury which could have been avoided as the ball had been out of play before he made his ill-fated tackle but was not spotted by the officials, while the sarcastic sweepstake touted by Everton fans on what time the endlessly injury-plagued Yerry Mina would pull up lame was answered when he did exactly that after 70 minutes.

Everton and Lampard want optimism, not the clouds that gathered over the club last season and which have continued into the summer with very public protests against Moshiri and Kenwright.

This was not the best start but there were elements of Everton’s performance that pleased Lampard and suggested he feels he has something to build on.

Now Everton must get the right business done – including bringing in the striker they should have signed to replace Richarlison – as the next few weeks could shape their season.