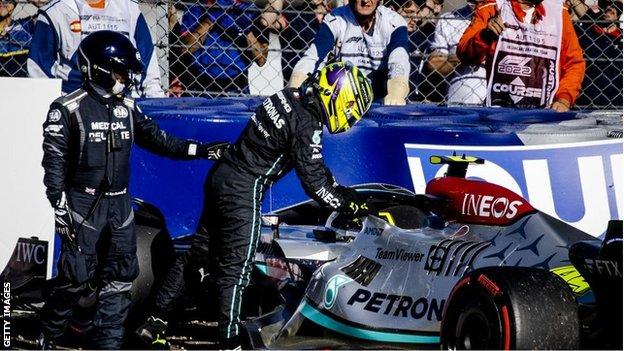 Lewis Hamilton has criticised spectators at the Austrian Grand Prix for cheering when he crashed in qualifying at the Red Bull Ring.

Hamilton went off at Turn Seven, close to grandstands packed with Dutch fans of his 2021 title rival Max Verstappen.

“I was going through a bunch of stuff in the crash, but to hear it afterwards you know… I don’t agree with any of that, no matter what,” he said.

“A driver could have been in hospital, and you are going to cheer that?”

The incident left Hamilton 10th in qualifying, although he was promoted to ninth on the grid for Saturday’s sprint event after a penalty for Red Bull’s Sergio Perez.

Speaking after the sprint, Hamilton added: “It’s just mind-blowing that people would do that, knowing how dangerous our sport is. I’m grateful that I wasn’t in hospital and I wasn’t heavily injured.

He made a poor start, and dropped to 11th on the first lap after being hit by Alpha Tauri’s Pierre Gasly at the first corner.

He spent much of the sprint stuck behind Haas drivers Kevin Magnussen and Mick Schumacher but unable to pass because the Mercedes had inferior straight-line speed than their Ferrari-engined cars.

He finally managed to overtake Schumacher with two laps to go.

Hamilton said: “The Ferrari power is just too much for us at the moment.

“I don’t know if it’s drag, or if it’s power, it’s difficult to quantify which one it is.

“It wasn’t particularly the most fun of races. It didn’t feel that quick. But as I said, I think there was something not right with the car after that [incident with Gasly].

“But a big, big thank you to my team for putting the car together. They worked crazy hard overnight and this morning to keep us in the race, so I hope tomorrow is a bit better.”