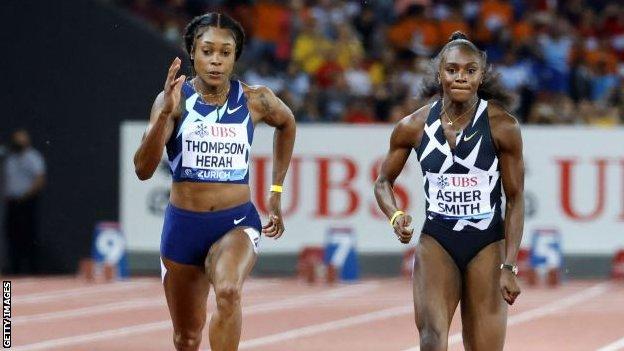 Dina Asher-Smith says her form is “light years” ahead of where it was when she won two world medals in 2019.

“I am confident in the work I have done,” she said before Saturday’s Birmingham Diamond League.

“I am confident in how much of a different person and athlete I am since 2019. It is light years away.”

She added: “When I peak in championship time it will be amazing to lay down some really good times.”

Asher-Smith won the 200m gold and 100m silver at the last World Championships in Doha and will compete over the shorter distance at the renovated Alexander Stadium on Saturday.

Her 10.83-second 100m personal best dates back to that 2019 final and Asher-Smith admits she is frustrated that the pandemic and injuries have prevented her showing the progress she has made.

“It is exciting to get some good races together, putting down just how much I have changed technically and how much stronger I have got.”

Asher-Smith is set to compete in the 100m at Diamond League meeting in Eugene on 28 May and plans to run in both the 100m and 200m when she returns for July’s World Championships in the United States.

Her hopes of competing in the Commonwealth Games in Birmingham and the European Championships, where she won three golds in 2018, will depend on how she recovers from her campaign in Oregon.

“We are definitely going to be mindful of how World Championships have been and how I feel coming off that because it is a really tight turnaround,” she added.

“You have to be reactive to the fact we have got a lot of races in an incredibly short space of time.”

Gabby Thomas, who beat Asher-Smith over 200m at last week’s Diamond League opener, is part of the 100m field that is missing Olympic champion Elaine Thompson-Herah who pulled out on Thursday, but includes Tokyo bronze-medal winner Shericka Jackson of Jamaica.

Thomas has happy memories of Birmingham after staying at the city’s university on a student sports tour during her time at Harvard.

“I stayed in the dorms with a couple of the girls and they were really, really friendly and welcoming,” the American recalled.

“It was a fun time. I was here for about a week training and hanging out with the Birmingham people.”

Since then she has emerged as one of the stars of the US scene, briefly becoming the second-fastest woman in history over 200m behind legendary compatriot Florence Griffith-Joyner last year and winning an Olympic bronze medal over the longer distance in Tokyo.

She says she is approaching this year and a home World Championships in better shape than ever.

“Actually yes,” she replied when asked if she was in the form of her life.

“I am building off Tokyo really well. Right before then I had just moved to a new coach and training group.

“Now I feel really, really fit and my season is showing it. I am running times that I had never run at this point in the season before.

“I am looking to break 11 [seconds]. I would like to get a wind-legal 10 seconds in at some point, if the weather allows.

“I think this is a perfect place to do it with really great competition and a beautiful stadium, and I know the energy is going to be amazing.”

Thomas, whose personal best stands at 11.00 seconds, has clocked six wind-assisted 100m under that time.