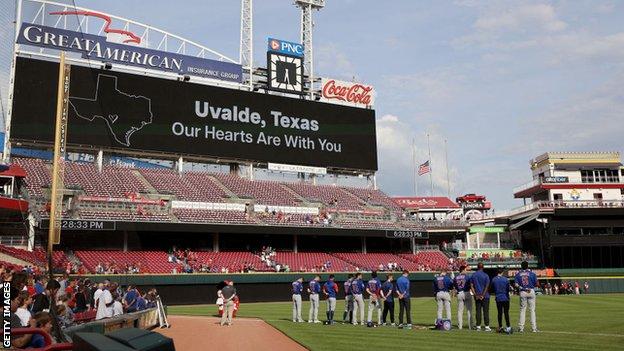 San Francisco Giants manager Gabe Kapler says he will not come out for the national anthem before games “until I feel better about the direction of our country”.

Kapler, 46, says he is acting after the Robb Elementary School shooting.

Nineteen children and two teachers were killed in Uvalde, Texas, on Tuesday.

Ex-NFL player Colin Kaepernick famously took a knee during the national anthem before San Francisco 49ers’ games in 2016 for a racial justice protest.

Kapler told reporters in Cincinnati, Ohio, on Friday: “I don’t expect it to move the needle necessarily, but it’s something I feel strongly enough about to take that step.”

He had earlier penned an essay on his website explaining his unhappiness at standing for the national anthem following a minute’s silence for the victims before a game on Tuesday.

The 2021 National League Manager of the Year said: “We didn’t stop to reflect on whether we are actually free and brave after this horrific event, we just stood at attention.

“My father taught me to stand for the Pledge of Allegiance when I believed my country was representing its people well or to protest and stay seated when it wasn’t. I don’t believe it is representing us well right now.”

He went on to criticise the gun industry, lobbyists and politicians and said he had wanted to drop to his knee.

“I am not OK with the state of this country,” Kapler added.

“I wish that I could have demonstrated what I learned from my dad, that when you’re dissatisfied with your country, you let it be known through protest. The home of the brave should encourage this.”

Earlier this week Golden State Warriors coach Steve Kerr refused to talk about basketball during a news conference and instead delivered an emotional speech condemning gun violence in the US.