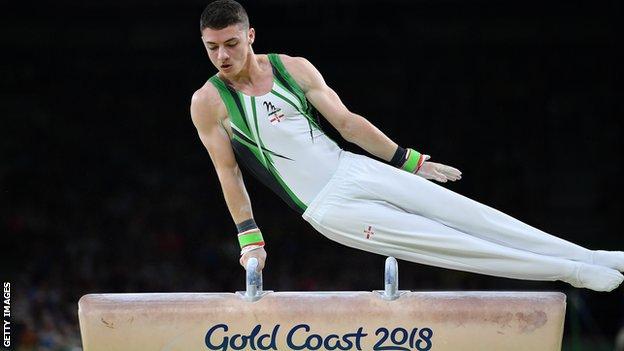 McClenaghan, Eamon Montgomery and Ewan McAteer were informed that the International Gymnastics Federation (FIG) had ruled that they would not be allowed to compete for Northern Ireland in Birmingham because they have represented Ireland in international competitions such as the Olympic Games, European Championships, World Championships and World Cup events.

The decision appears totally at variance with the 1998 Good Friday Agreement and seems to have been a complete solo run by the international gymnastics governing body.

The international peace treaty, which essentially ended the 30-year conflict, states that people in Northern Ireland have the option of considering themselves Irish or British and extends to the sporting arena.

As it stands, there is no suggestion any of the other 12 sports where Northern Ireland will be represented in Birmingham are of a similar mind to the FIG.

Put simply, if this edict was applied across the range of the sports that Northern Ireland will compete in at this summer’s Games in Birmingham, it would obliterate a team which is set to be around 90-strong.

The Lausanne-based FIG has been approached for comment on this ruling but with the news breaking during a holiday weekend in Switzerland, we may not hear more until next week.

The vast majority of the prospective Northern Irish Commonwealth Games hopefuls represent Ireland in international competition – which has universally been the case since the Good Friday Agreement which ended a self-imposed anomaly by then Northern Ireland Athletics Federation, that prevented local track and field athletes from representing Ireland and also competing at the Games.

But apart from the athletics rule, which was removed for the 2002 Commonwealth Games in Manchester, Northern Ireland sports people down through the years, including the likes of Barry McGuigan and Wayne McCullough, have been able to represent both Ireland and Northern Ireland.

Only this week, boxers Eugene McKeever, JP Hale, Dylan Eagleson have been competing for Ireland at the European Championships in Armenia before they turn their attentions to being part of a 13-strong Northern Ireland boxing squad in Birmingham which will be led by Tokyo Olympic bronze medallist Aidan Walsh.

That is very much the norm. In athletics, Portaferry middle-distance runner Ciara Mageean has twice won European Championship medals in an Irish vest, in addition to competing at two Olympic Games, but has also been immensely proud to represent what she calls “our wee country” at the Commonwealth Games.

These will include county Down swimmer and six-times Paralympics gold medallist Bethany Firth, who actually won the first of those titles when representing Ireland at London 2012 before switching allegiance to Great Britain and Northern Ireland.

McClenaghan, himself, is not the sort of individual to burst into tears on live TV but even he has spoken of a decision which “hits me hard and it hits my team-mates hard”.

The Newtownards man beat Olympic champion Max Whitlock to win the pommel horse gold in Australia in 2018 and was looking to get back on the podium in Birmingham after disappointments at last year’s Olympics Games and World Championships.

Who has got in the ear of the FIG?

Commonwealth Games NI described the FIG’s decision as “reprehensible” and has vowed to challenge the ruling.

Suffice to say, lawyers are already poring over the documents concerned and the shock move is likely to be something that unites Northern Ireland politicians.

It does seem extremely odd that the FIG has felt the need to wander into territory where it appears to be contravening a binding international agreement, which many contend, is a template for confliction resolution throughout the world.

The obvious question is precisely who has got in the ear of the FIG? Prior to this week, there was no suggestion that such a move was in the offing and it does seem bizarre in the extreme that the international gymnastics governing body has opted to pick this fight with Northern Ireland Commonwealth Games bosses.

However, the response from the Commonwealth Games’ overall governing body to the controversy was not overly encouraging, suggesting that their initial attempts to find a resolution had met with failure.

“We fully appreciate the complex and sensitive nature of this matter and have done everything we can to find a solution, including facilitating urgent consideration by the FIG Executive Committee,” said the Commonwealth Games Federation.

“As an athlete-centred organisation, we share the disappointment of the affected athletes and gymnastics fans and are in discussions with Commonwealth Games Northern Ireland regarding the immediate implications and appropriate next steps.

“We are continuing to work in partnership with FIG on preparations for the gymnastics competition at Birmingham 2022.”

The Commonwealth Games Federation need their gymnastics competitions to be sanctioned by the FIG so the extent to which they might be prepared to sacrifice that on the alter of three Northern Ireland gymnasts remains to be seen.