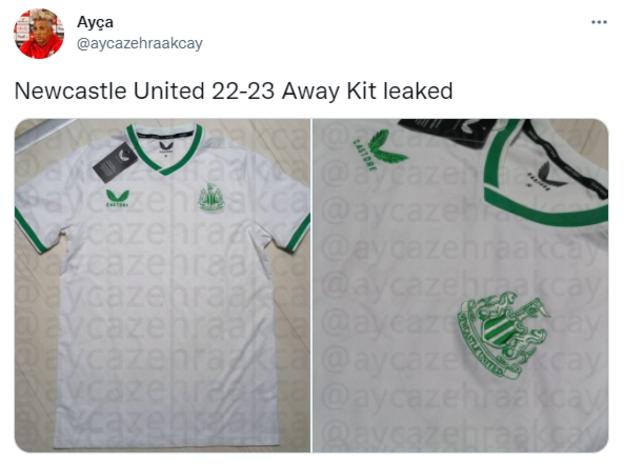 Newcastle manager Eddie Howe says he is “aware of the criticisms” of the club’s proposed third kit for next season.

Photos, which BBC Sport understand to be legitimate, of the shirt have been shared widely on social media.

The green and white design has been criticised because of its similarities to the Saudi Arabia national team kit.

Last week, Amnesty International said Newcastle wearing the shirt would be “clear evidence” of sportswashing by the Saudi state.

Newcastle were taken over in October by a Saudi Arabian-backed consortium. The Premier League approved the takeover after receiving “legally binding assurances” that the Saudi state would not control the club.

“I’m aware of the criticisms. I think from my perspective it’s not something I’ve had any control over,” said Howe.

“We were very aware when we went to Saudi Arabia that the interest in Newcastle is huge.

“I know I’m making an assumption here but our kit manufacturers have probably acknowledged that, and hence why we’ve ended up where we are.”

Saudi Arabia’s Public Investment Fund (PIF) – of which Saudi Crown Prince Mohammed bin Salman is chairman – has an 80% stake in the club.

The Saudi Arabian state has been accused of human rights abuses.

“If it is true that Newcastle United is changing its kit to match Saudi Arabia’s national colours, it exposes the power of the Saudi dollar and the kingdom’s determination to sportswash its brutal, blood-soaked human rights record,” said Amnesty International.

“Despite all their assurances of a separation between the Saudi owners and the club, this seems like clear evidence of the regime using Newcastle to portray a positive image.”