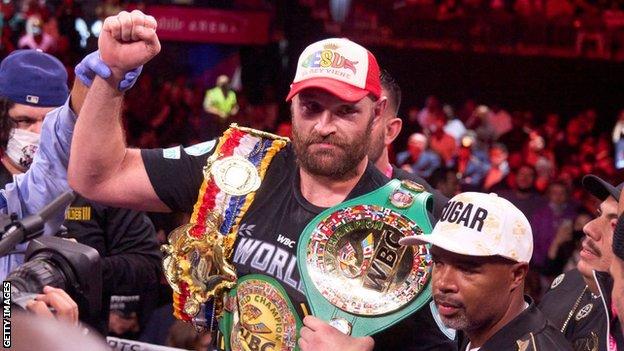 World heavyweight champion Tyson Fury says retirement is not on his mind before his bout with Dillian Whyte.

At the news conference to announce the fight last month Fury said he would “100%” retire after it.

Speaking during a news conference for his first UK fight since 2018, Fury did not talk about his links to Daniel Kinahan, who has been sanctioned by the US Treasury.

Kinahan has worked with Fury and fellow world champion Josh Taylor, and his links with boxing were the subject of a BBC Panorama investigation in 2021.

On Tuesday, US officials announced sanctions against several top members of the Irish Kinahan organised crime group, saying that Daniel Kinahan “is believed to run the day-to-day operations of the organisation”.

Several British journalists, including one from BBC Sport, were on Thursday’s Zoom call, which also featured promoters Frank Warren and Bob Arum as well as Fury and Whyte. But none of the journalists had the opportunity to ask Fury a question about Kinahan.

Fury left the call moments after Matt Lawton, chief sports correspondent of the Times, wrote “can we have a Kinahan question please?” in the group chat box on Zoom.

Riath Al-Samarrai, chief sports feature writer at the Daily Mail, said later on social media: “Moderator selected who among 96 journalists/YouTubers etc got to ask questions, of which there must have been 20. Not one mentioned Daniel Kinahan. No wonder boxing is such an absolute shambles.”

Lawton replied by saying his question “was ignored”, adding: “If Fury’s promoters [Top Rank] think that was a smart move, they’re mistaken.

“Top Rank insist there was no censoring of the media on that Zoom call with Fury.”

‘They’re going to make me the patron saint of England’

Fury will defend the WBC title he won from Deontay Wilder then retained during his trilogy with the American.

They were three of the five fights Fury has had in the US since beating Francesco Pianeta in Belfast in August 2018.

Having failed to agree an all-British bout with Anthony Joshua, Fury’s return to the UK against Whyte has attracted 94,000 ticket sales – the biggest post-war boxing crowd in the UK.

“It’s amazing,” Fury added. “I’m overwhelmed with the amount of support I’ve had in the last few years.

“It was only right for me to come back home and give the British fight fans what they deserve, what everyone’s been gunning for for a long time.

“After this fight they’re going to make me the patron saint of England, not St George,” said the two-time champion.