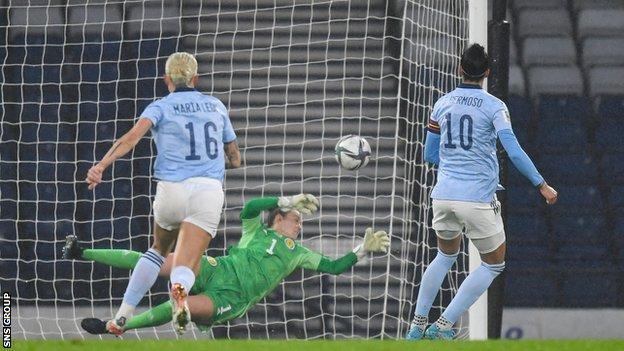 Scotland put in a resilient and much-improved performance despite another defeat by Spain in Women’s World Cup qualifying.

Beaten 8-0 in the reverse fixture, Pedro Martinez Losa’s side competed well but struggled to create against an accomplished Spain side.

Jennifer Hermoso scored in each half to seal top spot in Group B and a place at next summer’s World Cup for Spain.

While an encouraging night on the park at a rain-soaked Hampden, 7,804 watched from the stands, a record for a home competitive match for the women’s side.

Scotland now face a rearranged fixture away to Ukraine and a trip to the Faroe Islands, with two victories guaranteed to seal second place in the group.

After a week in which the players criticised the Scottish FA for their promotion of the game, and claimed the governing body did not support them to the same level as the men’s side, Scotland put in arguably their best display under Martinez Losa.

In the first half they pressed Spain high up the pitch and got in behind their classy visitors on several occasions but could not find the final pass or cross.

It was against the run of play when Ballon d’Or winner Alexia Putellas drew a foul from Nicola Docherty to allow her Barcelona team-mate Hermoso to score past Lee Alexander from the spot after 10 minutes.

In front of a near 8,000 strong crowd, the performance was a vast improvement on the drubbing in Seville in November, where Scotland could not get near Spain, who are among the favourites to win the European Championships this summer.

Jorge Vilda’s team did grow into the game and dominated possession, and Putellas had a headed goal ruled out for offside before the break.

Scotland were pinned back early in the second period and Esther Gonzalez passed up a good chance to double Spain’s lead, but the home side threatened to level too and produced a strong finish.

Claire Emslie was played through in the box but her first touch led her away from goal, and Martha Thomas did put the ball in the net but the flag for offside had long been raised.

Putellas again teed up Hermoso with a wonderful back-heel and her club team-mate dispatched the ball past Alexander from close range.

Player of the match – Erin Cuthbert

After some mixed results, Scotland can compete against the best playing a more possession-focussed pressing game.

Of course there were times that they were camped in their own box against one of the world’s best sides, but in the first half in particular they swarmed Spain in their own half and prevented them from building from the back.

Erin Cuthbert and Sam Kerr formed an impressive midfield partnership, and their grit and work rate allowed Caroline Weir ahead of them to show her quality in the first half. Manchester United’s Martha Thomas also led the line well.

Creating clear-cut chances does still remain a problem, they failed to register a shot on target at Hampden, but there is plenty to build on for Martinez Losa with the games against Ukraine and the Faroe Islands to come.

Scotland have a crucial rearranged match against Ukraine to fit in – likely in June – before finishing their campaign in the Faroe Islands in September.