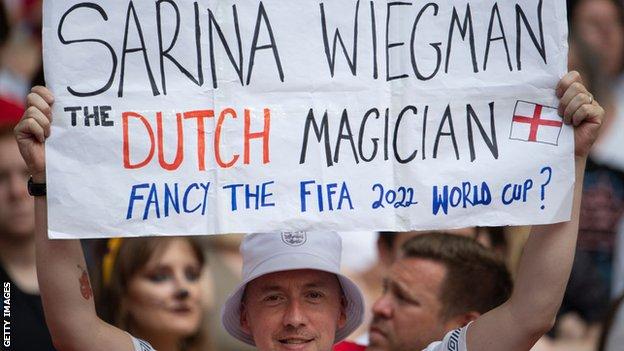 Watching England dancing, singing and showing off the Euro 2022 trophy in front of thousands at Trafalgar Square was enough to satisfy supporters for years to come.

A first major trophy in their history, a fine 20-match unbeaten run under manager Sarina Wiegman and a record-breaking home Euros on several fronts. Well, it doesn’t get much better, does it?

Delighted England fans have called for statues of Wiegman to be built outside Wembley Stadium to celebrate her – and her team’s success – as well as home towns having offered “freedom of the borough” honours to England’s stars.

However, despite all the deserved accolades and praise thrown their way, defender Lucy Bronze has already started thinking about the World Cup in 2023.

“I feel on top of Europe, but there’s still one more we can get our hands on,” said Bronze, speaking on stage in London’s iconic square.

“There’s a little star missing from our crest on the England shirt,” added Bronze, referring to the star that signifies a team has won the World Cup.

“That’s definitely a mission of ours to get that star there.”

And the Lionesses, who are top of their World Cup qualifying group and odds on to seal qualification for next year’s tournament in Australia and New Zealand, don’t have long to wait to attempt to add to their trophy cabinet.

Given what England have achieved in the 10 months since Wiegman took charge, there will be high hopes the team can also end their wait for a first ever World Cup title.

The Football Association’s (FA) chief executive Mark Bullingham even admitted winning the Euros so early on in Wiegman’s tenure was something they had not expected – and that winning the World Cup was more realistic.

But what England’s incredible Euro 2022 success has done, is laid very strong foundations for 2023.

As Bronze pointed out, young players like final match-winner Chloe Kelly, 24, “super-sub” Alessia Russo, 23, and Manchester United star Ella Toone, 22, were all competing in their first major tournament and have only experienced winning.

The confidence, fearlessness and enjoyment from that final victory over Germany will stand them in good stead for the future.

Having stopped the cycle of successive semi-final exits, the mental barrier that was once there for the senior players is no longer in the way.

“We always want more,” said Toone. “We’ve been waiting a long, long time for this and now we’ve got it, we want more.

“We want to go to the World Cup and do exactly what we’ve just done.”

Youth is on England’s side too.

Eleven of the 23-player squad at the Euros are aged 25 or younger, including captain Leah Williamson, 25, and key Manchester City duo Keira Walsh, 25, and Lauren Hemp, 21.

Euro 2022 Golden Boot and Golden Ball winner Beth Mead is still only 27, while number one goalkeeper Mary Earps is 29.

That means there is unlikely to be much change in the squad next year and they can continue to form strong connections under Wiegman.

The United States’ golden generation of Alex Morgan, Megan Rapinoe and Carli Lloyd have helped them dominate the last two World Cups – seeing off England in the 2019 semi-final on their way to back-to-back titles.

But this is England’s ‘golden generation’ and it is hard to see them not challenging for more silverware, given the efficiency in which they won their first.

From the moment Wiegman arrived, there was a change in culture in England’s camp which brought them together in a way they had not been before.

Early success helped strengthen that. England won 8-0 in her first game in charge and by the end of 2021, they had scored a staggering 53 goals without reply in six matches.

A first taste of silverware came in February when they won the invitational Arnold Clark Cup, pipping Germany, Canada and Spain, who were all ranked above them.

Confidence continued to grow, performances improved and Wiegman impressed with her tactical intelligence and effective decision-making.

Wiegman was able to successfully plot a route to the Euro 2022 title – she asked for more competitive fixtures, she asked to play games around the country to build home support and she had specific requests for the Euros base camp in London – all of which were delivered.

With the FA showing they are fully willing to back Wiegman and her staff – she delivered the results and the sought-after trophy. There are no doubts she will have the backing of the organisation again next year.

Expectation will, of course, increase with the players now under an intense spotlight following their historic success.

But the Lionesses have shown this summer they are capable of dealing with pressure.

Other nations will be stronger next year – Spain, Germany and France showed their pedigree at Euro 2022, while the likes of Austria and Belgium also impressed. Add four-time world champions USA, along with Olympic champions Canada, and all of a sudden winning the World Cup becomes a tougher proposition.

However, as the teams start to prepare for next year’s tournament, the question of how to stop Wiegman’s England will uppermost in their minds.