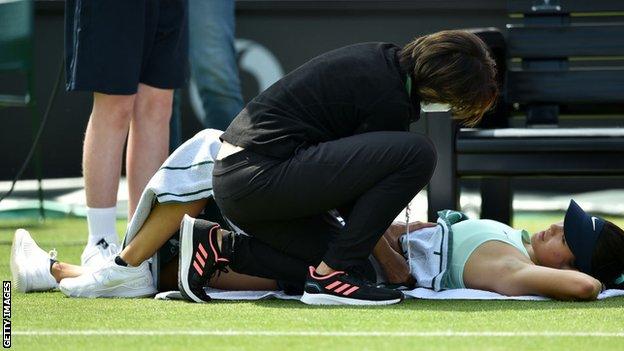 Emma Raducanu says she has “no idea” whether she will be fit for Wimbledon after she retired from her Nottingham Open opener against Viktorija Golubic.

The 19-year-old US Open champion conceded the match while down 4-3 and a break of serve in the first set, having suffered an injury to her left side.

“I think I pulled something,” she said, adding the injury was “an absolute freak”.

“I cannot diagnose myself,” Raducanu added. “I will get it checked out.”

The British number one took a medical timeout early in the first set but, despite treatment and a dose of painkillers, she conceded the match shortly after as Swiss world number 55 Golubic edged ahead.

It is Raducanu’s third mid-match retirement since her 2021 US Open win.

The world number 11 also bowed out of matches in Guadalajara in February and Rome in May with injuries.

She lost in the second round of the French Open last time out, but cited her ability to come through the campaign without any injuries as one of the positives to take from Roland Garros.

Raducanu is yet to win more than two matches at a tournament since her astonishing run from qualifying to the title at Flushing Meadows in September.

She has worked with a number of coaches since combining with Andrew Richardson for her victory in New York.

Raducanu is due to continue her grass-court swing at next week’s Rothesay Classic in Birmingham.

Wimbledon, where she reached the fourth round last year, starts on 27 June.