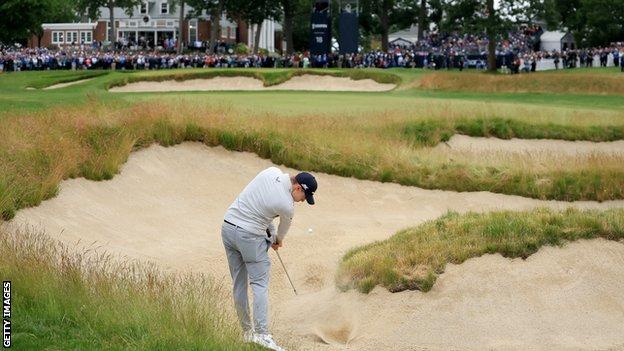 Matt Fitzpatrick admitted that “one of the best shots” he has ever hit that led to him winning the US Open in Boston, was actually a “hit and hope”.

The Englishman was referring to a 160-yard shot from a fairway bunker to 18 feet on the 18th in the final round.

He two-putted for par to win on six under, one ahead of Will Zalatoris and world number one Scottie Scheffler.

“I guess ability took over and when I saw it leave the sand I couldn’t have been happier,” said the 27-year-old.

“It’s one of the best shots I’ve hit of all time.

“I hit some unbelievable shots coming down the stretch. I look back to my three approaches into 15, 16, and 17 as all really, really good shots. On 18 it was kind of just a bit of hit and hope.

“I just felt I had to hit the green. I was trying to make a par on 18 and put the pressure on him and force him to make a birdie.

“I knew Will was going to hit it close. I knew he was going to give himself a chance. When I hit that shot, I thought at least I’ve got a chance too.”

Zalatoris, who was also a runner-up at last month’s US PGA Championship, after being beaten in a play-off by Justin Thomas, missed a 15-foot birdie putt to force extra holes at Brookline Country Club in Massachusetts.

He described Fitzpatrick’s approach as a defining moment that will be looked back upon in years to come.

“Matt’s shot is going to be shown probably for the rest of US Open history,” Zalatoris said.

“I walked by it, and I thought that going for it was going to be ballsy, but the fact that he pulled it off and even had a birdie look was just incredible.”

Six is the magic number

Fitzpatrick’s success comes a month after going close at the US PGA Championship, where he finished two strokes behind eventual winner Thomas having gone into Sunday’s fourth round in the final pairing.

However, after delivering a nerveless display to break his major duck at Brookline, Fitzpatrick says his target now is to try and emulate Sir Nick Faldo’s achievement of six major championships.

Faldo, who is widely regarded as England’s most successful golfer, won the Open Championship three times and the Masters three times between 1987 and 1996, and spent almost two years as the world number one.

Earlier in the week Fitzpatrick had been talking about the number of majors needed to be considered a legend in the sport.

When asked on Sunday what that number might be, he replied: “Six. That’s the number that we all agreed on. I’ve got a bit of a way to go, but it’s a good start.”

Fitzpatrick’s triumph sees him share the honour of being one of only two male players to have won US Amateur and US Open on the same course, while American Juli Inkster is the only woman to achieve the feat.

Golfing great Jack Nicklaus, who won a record 18 majors, did it at Pebble Beach in 1961 and 1972, while Fitzpatrick won the US Amateur at Brookline in 2013.

“Any time you’re sharing a record with Jack Nicklaus, it’s unbelievable,” Fitzpatrick added. “So for me to have that as well is incredible.

“He called me up at the presentation to congratulate me. Coming from someone like that, it means the world.”

At the trophy presentation ceremony, Fitzpatrick joked: “I don’t know if Jack is listening to this but he gave me some abuse at the start of the year, when I won a members’ competition at his club and he said ‘congratulations on finally winning in the United States’.

“I can go back to him now and say I’ve won twice.

“I had the big monkey on my back of not winning over here, it’s all everybody talked about and to do it in a major, there’s nothing better.”