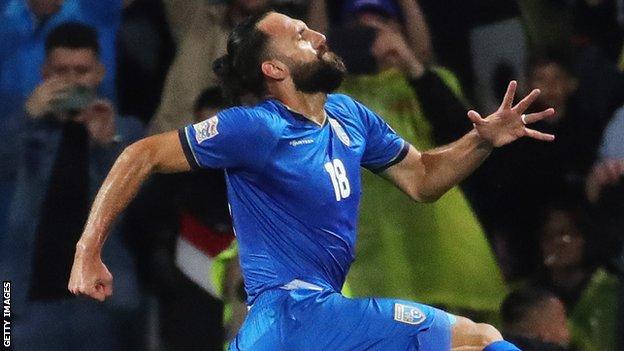 There seems to be no end to Northern Ireland’s Nations League misery as a 3-2 defeat by Kosovo means they have now gone 13 games without a win in the competition.

Striker Vedat Muriqi scored an early penalty for the hosts in Pristina, with Zymer Bytyqi doubling the lead moments later.

Shayne Lavery headed home for the visitors on the stroke of half-time before Muriqi grabbed his second soon after the break.

A header seven minutes from time by Daniel Ballard, Northern Ireland’s best player on the night, produced a late flurry from the visitors, with Conor McMenamin failing to connect with a great chance to snatch an equaliser.

The defeat continues a hugely disappointing start to Nations League Group C2 for Ian Baraclough’s much-changed side after they opened with an abject 1-0 loss at home to Greece and followed that with a flat 0-0 draw in Cyprus on Sunday.

It leaves the former Under-21 manager’s record in charge of the senior international team standing at just three wins and 10 defeats in 19 competitive outings.

They went into this opening Nations League quadruple-header with Baraclough calling for four wins from four, but he and his young squad now welcome the Cypriots to Windsor Park on Sunday under pressure from supporters and desperate for a much-needed victory.

With leaders Greece continuing their 100% record with a 3-0 win over Cyprus on Thursday evening, Northern Ireland remain third in the group, ahead of bottom side Cyprus on goal difference.

The manager said in the build-up to the match that he was still the best man to lead Northern Ireland and there were signs in the second half that his team were displaying more energy than they had in their previous matches, but they were still very-much second best against a team ranked 53 places below them in the world rankings.

Kosovo’s opener came in the ninth minute when a rare moment of recklessness from experienced Northern Ireland captain Steven Davis saw him needlessly lunge in and bring down Milot Rashica just inside the penalty area.

Jakob Kehlet pointed to the spot and up stepped Muriqi who showed no nerves as he calmly slotted a low left-foot strike into the bottom corner and beyond the reach of the outstretched Bailey Peacock-Farrell.

Bytyqi made it 2-0 on 19 minutes when he made the most of teenage full-back Brodie Spencer, making his first NI start, switching off and not tracking his run, allowing the forward to get inside him and volley home an excellent cross by Milot Rashica.

Lavery, who had failed to get into the game while playing on the right of a front three, offered Northern Ireland hope when he got on the end of an excellent Spencer right-wing cross to head home from a yard out in first-half injury-time.

That hope faded again seven minutes into the second half when Muriqi bundled home a volley from close range after a cross from Lirim Kastrati took a deflection off Ciaran Brown and fell invitingly into his path.

The second half saw little goalmouth action as the hosts looked comfortable until the 83rd minute when Ballard rose highest in the box to meet an excellent free-kick from Jordan Thompson and plant a well-directed header into the top corner.

It breathed life into the visitors and McMenamin’s big chance to equalise came two minutes later from another low Spencer cross, but the Glentoran winger failed to get a proper connection on his shot and Betim Fazliji slid in with a great block.

While the pre-match team sheet suggested a return to the 3-5-2 formation for Northern Ireland, it was a 4-3-3 shape that Baraclough’s men lined up in for a match that they had to get something out of to redeem any lingering Nations League hopes.

However, as he did in Cyprus on Sunday, Baraclough went with a 4-3-3 shape that meant a left-back role for Brown – more accustomed to playing centre-half – with Huddersfield Town teenager Spencer getting his first start at right-back.

It meant Blackpool striker Lavery, whose biggest strengths include running in behind defences from a central area, occupying a position on the right of a front three that had Kyle Lafferty in the centre and McMenamin getting his first Northern Ireland start after a lively debut off the bench in Larnaca.

McMenamin once again looked sharp and a neat turn and run down the left early on offered promise for the 400-strong travelling supporters – but their hopes were soon dashed as their captain made that reckless lunge in the box and they fell behind to Muriqi’s spot-kick.

Northern Ireland’s response was decent, with Jonny Evans and George Saville having efforts on goal, but the hosts capitalised on naivety from Spencer as Bytyqi ghosted in from a wide area to volley home.

Visiting goalkeeper Bailey Peacock-Farrell kept his side in it with an excellent save at his near post from Florent Muslija, before Spencer atoned for his error by delivering a superb cross for Lavery to nod home on the line.

Baraclough’s thought will now turn to Cyprus on Sunday, with a home match against the group’s bottom side representing their best chance to break that 13-game winless run in the Nations League.