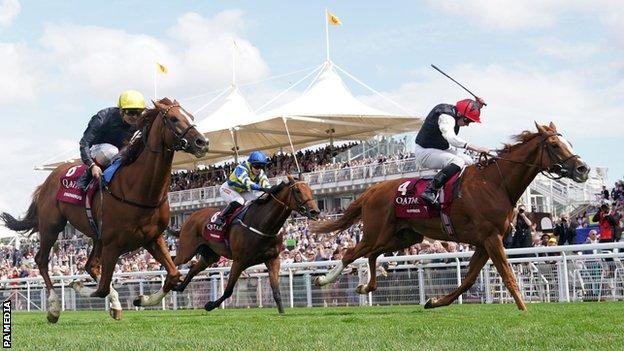 Kyprios edged out Stradivarius to claim victory in a dramatic Goodwood Cup.

Gold Cup winner Kyprios eased to the front in the closing stages and held off Trueshan (2-1) before then narrowly seeing off a charging Stradivarius.

It was a memorable finish as Stradivarius (9-2), who was ridden by Andrea Atzeni, was denied a fifth victory in the race.

“He’s only doing what he has to do,” favourite Kyprios’s jockey Ryan Moore told ITV after the win.

“It was a steadily run race. He was in front a long way out and he just waiting.”

Stradivarius ended up second and Trueshan, who won the race last year, was third behind the Aidan O’Brien-trained Kyprios.

“Aidan always had a lot of belief in this horse,” added Moore. “At the start of the year, he was saying what he thought he could do. All credit to him and everyone at home for getting him back.

“He’s a pleasure to ride, a lot of class. He’s a proper horse. I think there’s more to come.”

Happy to go on for at least one more – Stradivarius owner

Frankie Dettori was aboard the eight-year-old Stradivarius when he was third in the Gold Cup and was replaced by Atzeni for Tuesday’s race.

“He ran his heart out again,” said Atzeni. “The race went quite smoothly. The horse I went with followed the winner, we went a nice pace.

“Four out Trueshan arrived on my outside, but it was a long way from home, I did not want to get racing early.

“I followed him through and my main challenge in the middle of the track was that the winner just went away from us.

“Maybe he just got a bit lonely on his own, but he ran to the line as a champion and you can’t take that away from him.”

It was thought the race could have been a last for Stradivarius but owner Bjorn Nielsen confirmed that would not be the case.

“We are not going to say goodbye after that,” said Nielsen.

“He still has his enthusiasm and is still training well. There’s no point in stopping him in the middle of the season.

“Happy to go on for at least one more.”