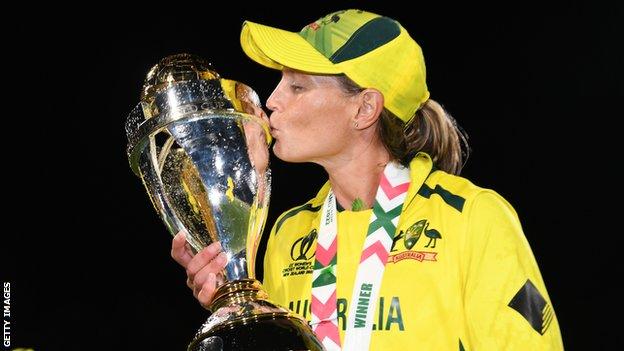 Meg Lanning says Australia’s players will relish the chance to complete a ‘grand slam’ of tournament victories at this month’s Commonwealth Games.

Australia currently hold the women’s Ashes as well as World Cups in both T20 and 50-over formats of the game.

A men’s cricket event was played at the 1998 Games in Malaysia but this is the first-ever women’s tournament.

“We’re looking at it as a very unique opportunity. We want to win that gold medal,” Lanning, 30, told BBC Sport.

“Our group is really excited about it. It’s a new challenge, and I think it comes at a really good time for our team.”

Lanning’s side also romped to victory in the World Cup in April, defeating England in the final to go through the tournament unbeaten.

All the matches will be staged at Edgbaston from 29 July to 7 August and Lanning claimed Australia will thrive on the opportunity to be part of a multi-sport Australia team at Birmingham 2022.

“This is not something we are not necessarily used to,” said Lanning, who has played 100 ODIs and 115 T20Is for Australia.

“I’ve grown up watching the Commonwealth Games and I love it. I love the idea of a team atmosphere and coming together.

“One of the things we are looking forward to is learning off other athletes and being at the athletes’ village seeing how other teams and individuals go about things.

“It’s also a chance for the game to reach a new audience, a new platform, and that’s only going to continue to grow the game.”

‘Get cricket in the Olympics’

Lanning is a strong advocate of cricket being part of the Olympic Games in the future, and sees the potential for it to help globalise the women’s game.

Government funding for sport in many countries is linked to Olympic inclusion, which leaves cricket short of vital cash in places where it is still developing.

The working group established by the International Cricket Council to lobby for it to be part of the 2028 Games in Los Angeles are expected to provide an update at the ICC’s Annual General Meeting in Birmingham later this month.

“Cricket in the Olympics would be amazing. Especially for the game as well, to reach a new audience,” Lanning added.

“It would allow different people to see that game would really help the growth of it in other countries around the world, and particularly for women.

“I’m not really sure what it takes to get it into the Olympics, but from the perspective of players, it would be amazing.

“It’s something I’d love to do but I think if it was going to happen, it will probably be once I’ve finished up playing.”