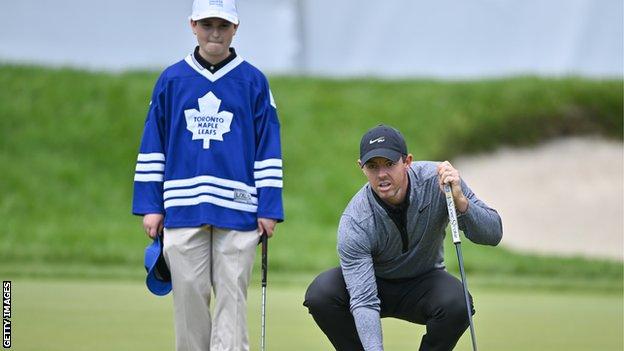 The golfers playing in the inaugural Saudi-funded LIV Golf event this week are doing it for “boatloads of cash”, says Rory McIlroy.

Major champions Phil Mickelson and Dustin Johnson are reported to have been paid $200m and $150m respectively to play in the fledgling series.

McIlroy is defending his Canadian Open title this week on the PGA Tour.

“We all know why everyone’s playing in London this week,” he said of the LIV Golf event.

“It’s boatloads of cash and it’s money up front. I get it and for some guys that’s really enticing.”

The first tournament of the $250m eight-event LIV Golf Invitational Series is taking place at Centurion Club, near London, this week.

LIV Golf is being fronted by former world number one Greg Norman, who says he has secured an extra £1.6bn of funding from Saudi Arabia’s Public Investment Fund to turn the series in to a 14-event league by 2024.

Northern Ireland’s McIlroy reiterated that he has no desire to play in the series but has called on the game’s leading administrators to “get in a room and figure it out”.

Norman, who says he wants his new venture to run alongside existing tours, has claimed that he has not spoken to PGA Tour commissioner Jay Monahan despite repeated attempts to do so.

Monahan said in March that the tour will “not be distracted by rumours of other golf leagues” and the PGA Tour has threatened to ban its members who play in the LIV Golf events, a move Norman called “anti-golfer, anti-fan and anti-competitive”.

“I feel like the professional game was on a nice trajectory, where everything was becoming more cohesive and now it’s becoming more fractured again and I don’t think that’s a good thing,” added McIlroy.

“I do understand why they are playing. I just think they’re thinking very short term. But everyone has to do what’s right for themselves and who are we to say otherwise?”

McIlroy conceded that he has accepted appearance fees to play at tournaments worth more than the prize for winning the event.

“The first few times, I felt a little flat,” he said. “I felt like I didn’t need to try because I’d already earned the money, and that didn’t work out too well. So I had to learn from early on in my career that you show up and still give it 100% to try to win the tournament.”

His fellow European Ryder Cup players Ian Poulter, Lee Westwood, Sergio Garcia and Graeme McDowell are among those in the LIV Golf field this week, putting their futures in the biennial event in jeopardy.

The DP World Tour, which has a ‘strategic alliance’ with the PGA Tour, has also threatened to ban players who take part in the new series. And players who are not members of the European-based Tour are ineligible for the Ryder Cup.

McIlroy thinks that despite their defiance of the Tour, “they should still be able to play”.

He said: “They’ve been such a part of the Ryder Cup. Look at the history Poulter has, it would be a real shame for him not to be involved going forward, whether as a vice-captain, captain or one last time in a playing capacity.”

However, he accepted “it’s a weird time in pro golf and were going to have to see how this season plays out”.