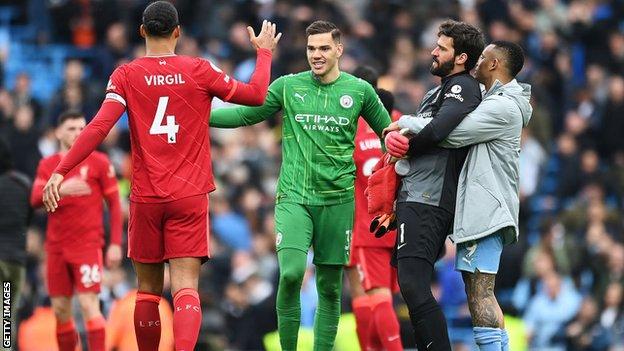 Manchester City’s match with Liverpool on Sunday was a ferocious battle on the pitch but at full time there was nothing but respect for one another.

With the title on the line and only seven games remaining, the players and managers of both clubs could have been forgiven for letting their emotions spill over during and after the 2-2 draw, something seen plenty of times before when title rivals have gone head to head.

But there was mutual appreciation from both sets of players and a sense they had competed in a match of the highest quality.

After a pulsating 90 minutes which had everything – goals, VAR decisions, crunching tackles and an ever-changing narrative – players and managers embraced each other.

The Brazilian contingent of City’s Gabriel Jesus and Ederson and Liverpool’s Roberto Firmino, Fabinho and Alisson were huddled together at full-time, discussing the outcome.

City boss Pep Guardiola clasped hands with his counterpart Jurgen Klopp before hugging, while Kevin de Bruyne was quick to highlight the quality of their opponents in his post-match interviews.

“A lot of the players know each other because they live in similar areas. My kids go to school with lots of theirs and are friends with them,” De Bruyne told BBC Sport afterwards.

“Private is private, but once we are on the pitch everyone gives their all for the team. I think that’s the way it should be. You don’t have to fight all the time. We battle on the pitch and that is it.”

Rivalries during the Premier League years have often featured fiery press conferences and heated exchanges in the tunnel between players.

While Rafael Benitez was at Liverpool’s helm he endured many back-and-forth exchanges with Chelsea boss Jose Mourinho in the media as the two met in high-stakes European competition.

Old nemeses Arsene Wenger and Sir Alex Ferguson locked horns on plenty of occasions while in charge of Arsenal and Manchester United respectively, while midfielders Patrick Vieira and Roy Keane translated that rivalry on the pitch.

But Guardiola wanted Klopp to know at full-time that he “respects him a lot”.

The two have met 23 times in total – a rivalry which previously began in the Bundesliga when Klopp was at Borussia Dortmund and Guardiola was in charge of Bayern Munich.

“I don’t know if Jurgen respects me but Jurgen has to know I respect him a lot. He has made me a better manager,” said Guardiola.

“His team is always there, they are always aggressive. We are not friends, we never see each other, I have his number but I don’t call him. I have respect for him, but he knows next Saturday [in the FA Cup semi-final] I am going to try to beat him.”

Before Sunday’s showdown, Klopp admitted he would not be sad to see the back of Guardiola when he finally retires but described him as “the best coach in the world”.

“All I say about City I really mean. Pep is the best coach in the world, no problem with that, but I always wanted to be the coach of the team who can beat the best team in the world,” he added.

The two teams face off at Wembley in six days’ time for a place in the FA Cup final and could still meet in the Champions League final if both progress.

The title race promises to go down to the wire too – since the start of the 2018-19 season, combining all four campaigns, City and Liverpool have been separated by just a single point.

And the idea of the two battling it out again is one that will surely excite Klopp, who described the 2-2 draw at Etihad Stadium as “an exceptional game” on a “completely different level”.

“Two heavyweights, chomping at each other. It’s crazy the intensity. It was a proper football game.

“If you played for another club yesterday, won, trained today then watched City v Liverpool… I don’t know what I would have done to watch it but to be a part of it? I cannot stop being surprised. I love it.”