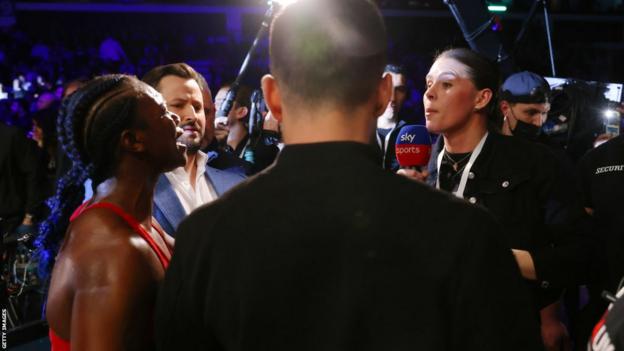 A fight against Savannah Marshall could rival the size of Katie Taylor’s historic win over Amanda Serrano, says Claressa Shields.

Ireland’s Taylor edged a split-decision victory over Serrano at Madison Square Garden in New York earlier this month in a fight described as the biggest in women’s boxing history.

“I believe the storyline behind it means it can be as big,” said Shields.

“With how great I am, and how she’s built up to be this knockout artist – that’s why this fight should be happening in London.”

Shields, 27, is a multiple world champion across three weight classes, a two-time boxing Olympic gold medallist and has won all 12 of her professional fights.

The single defeat of her amateur boxing career came against Britain’s Marshall in 2012.

The only thing preventing Shields from being crowned the division’s undisputed champion is that the WBO middleweight title lies elsewhere – with 31-year-old Marshall.

A bout between the pair has been rescheduled numerous times, while the fighters have also been critical of one another on social media.

Shields has said she does not respect her rival.

“I haven’t beat these girls because they were easy, I’ve beat them because I was great. Savannah Marshall’s claim to fame is ‘oh she wouldn’t have won any of that if I fought her’.

“The UK is building her up to be this knockout artist and they’re gonna be disappointed.”

‘Canelo is getting $90m for things I’ve already done’

Shields is a professional mixed martial artist as well as boxer after a signing a contract with MMA promotion the Professional Fighters League (PFL) in 2021.

She has fought twice in the PFL, winning once and losing the other, with her next bout scheduled for November.

Shields has said she turned to MMA because the sport was presenting opportunities for women that were not present within boxing – one example being that the PFL boasts a $1 million prize for winners of its annual tournaments.

“When I signed with the PFL, boxing was going slow and I was pretty tired of fighting for money when I knew I was worth way more,” said Shields.

“To be two-time Olympic champion, three time undisputed world champion – Canelo [Saul Alvarez] is doing things that I’ve already done but he’s getting 90 million for it.

“Yes he’s a big star but I haven’t been given that opportunity and platform to be a huge star.

Shields has suggested that Taylor and Serrano were given a platform previously denied to female boxers.

“I think people are overlooking the fact that Taylor and Serrano were the first women given that opportunity to actually perform on those platforms and be the main event,” she said.

“If that opportunity would have been given to myself in the US, we would have done great numbers but we also need a good opponent.

A number of mixed martial artists have turned to boxing in recent years, but it is less common to see the move in the opposite direction.

Shields admitted that learning the ins and outs of grappling had been the hardest task in adapting.

“I’m getting there but I haven’t reached the level I want to be yet.”

Shields said her drive to challenge herself was what separated her from other boxers.

“I’m just a person that believes I can do anything when I put my mind to it and if I train for it and work for it, I can accomplish it,” she said.

“That’s another reason why I’m the greatest boxer of all time. Name another boxer who’s doing what I’m doing, who goes inside the cage with other MMA fighters and wins and also continues to be dominant in boxing.”