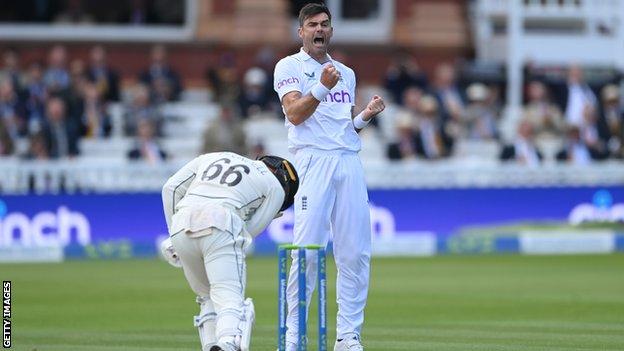 “We could have been ‘oh they’ve got a big partnership going, two guys nearing a hundred’ and you could feel down about it,” said Anderson.

“But when the coach sends you home by saying he’s excited, you go to bed in a completely different mindset.”

Anderson, speaking to the BBC’s Tailenders podcast, says McCullum pointed to the quality of England’s bowling attack on the second evening of the game, when New Zealand were 236-4 in their second innings.

He reminded the bowlers they had a new ball due in one over’s time and suggested England could take New Zealand’s last six second-innings wickets for “less than 50” – thus limiting any run-chase to less than 300.

That positive mindset also helped England on day one, when they squandered a promising position by falling to 116-7 after earlier bowling out the tourists for 132 at Lord’s.

“That first day when we lost wickets, in years gone by we’d be too down about that and got worried and stressed,” says Anderson, 39.

“But the message from the coach and captain was that we’d bowled brilliantly, fielded brilliantly, started great with the bat but in Test cricket you do have ups and downs.

“There are times where the opposition does fight back so let’s just park it and come back tomorrow and try as best we can.

“There’s been a good vibe. I have enjoyed the positivity.”