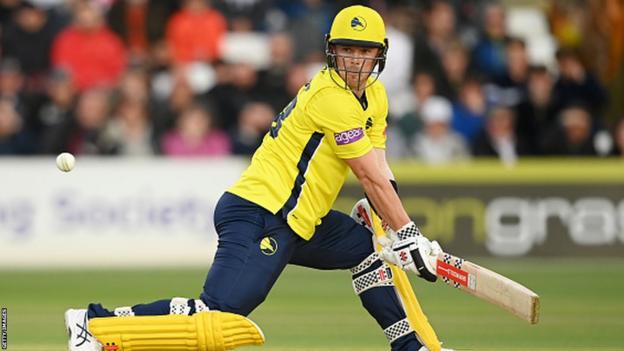 Ben McDermott and James Vince starred for Hampshire with a fine 132-run opening stand to help the Hawks beat Middlesex by nine wickets in the T20 Blast South Group.

McDermott hit a superb 83 off 30 balls, which included nine sixes and five fours, while Vince finished unbeaten on 54 as Hampshire chased down Middlesex’s 142-7 in 12 overs.

And in the North Group leaders Lancashire continued their good form with a seven-wicket win over Leicestershire.

Having claimed their first victory in the Blast after four straight losses last week, Hampshire Hawks have now won two on the bounce.

McDermott and Vince’s century partnership was their second in three days after the pair made 124 in 70 balls in Hampshire’s victory against Sussex last time out.

Middlesex had collapsed to 94-6 with Liam Dawson taking 3-14 from his four overs in the first innings.

Jack Davies (34) Martin Andersson (25 not out) rallied with a late partnership for the hosts but their side’s total always looked under par and was easily reached thanks to Hampshire’s top-order heroics.

Meanwhile, Northamptonshire Steelbacks chased down Derbyshire’s score of 151-9 with just under two overs to spare.

In reply Northamptonshire eased over the line as skipper Josh Cobb top-scored with 70 off 44 in a five-wicket win.

Defending champions Kent Spitfires fell to another sorry defeat, posting 130-9, which was routinely chased down by Essex Eagles inside 16 overs with seven wickets remaining.

The Eagles’ Michael Pepper then made a bruising 50 from 29 balls with four sixes to hand the Spitfires a sixth loss from seven matches.

Gloucestershire posted a five-wicket win over Glamorgan, chasing down 158 with six balls remaining.

Skipper David Lloyd reached 68 off 43 and all-rounder Dan Douthwaite took 3-30 for Glamorgan but it was James Bracey’s 63 off 49 that helped Gloucestershire edge past their neighbours.

In the North Group’s only fixture Lancashire Lightning cantered to a win over Leicestershire Foxes to extend their unbeaten start to six matches and bolster their lead at the top of the standings.

Fresh from his England Test debut last week, leg-spinner Matthew Parkinson took 2-27 while Foxes’ wicketkeeper-batsman Lewis Hill scored 50 from 34 deliveries as Leicestershire were all out for 135 with five balls remaining in their innings.

In response Leicestershire and Afghanistan bowler Naveen-ul-Haq took 2-32 and ran out top-scorer Steven Croft (45), but Lancashire, with three wickets down, ultimately cruised over the line with a little over three overs remaining.