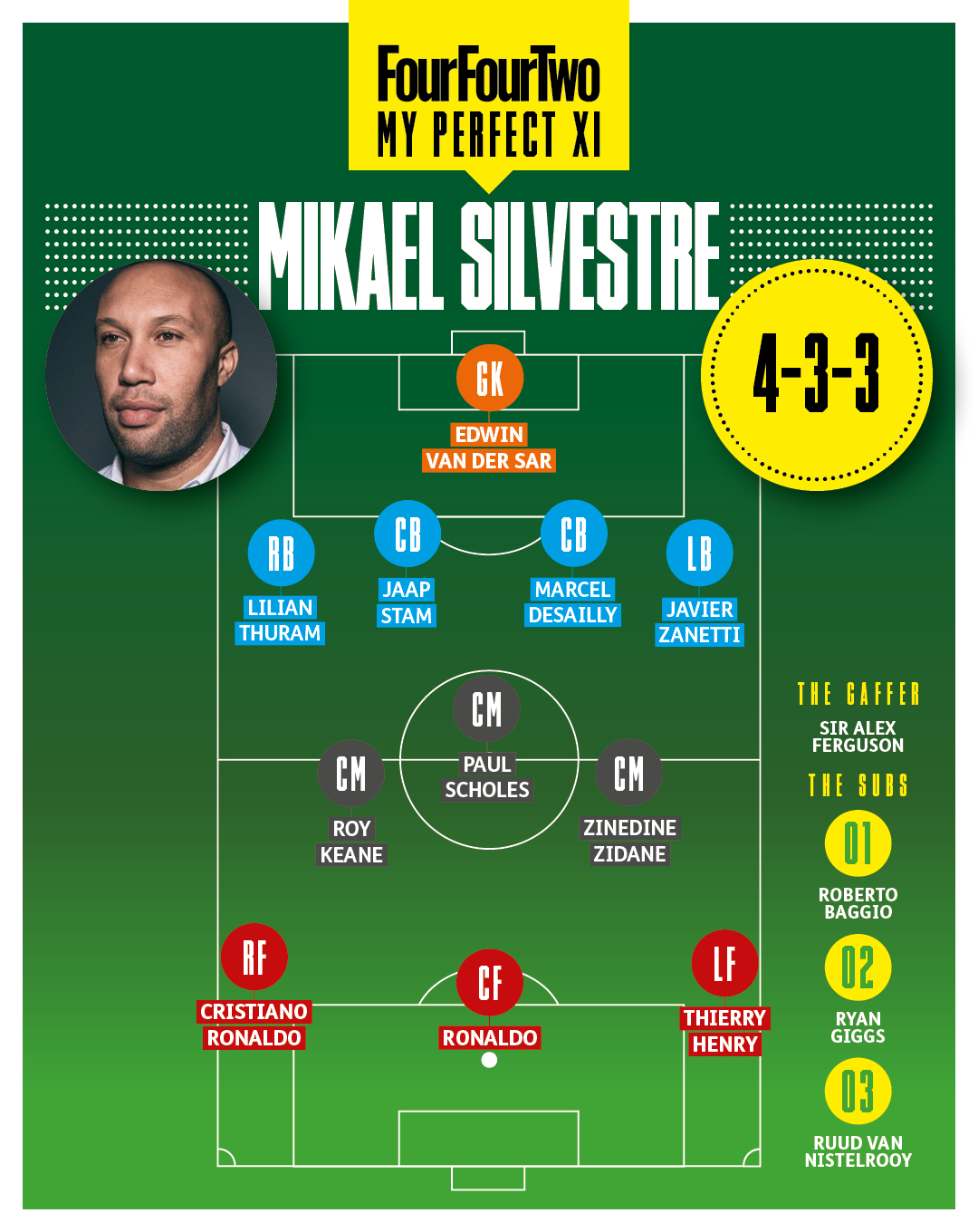 Former Manchester United and Mikael Silvestre has a fair few selection headaches when it comes to the greatest-ever XI of teammates from his career.

Not only did the ex-defender play under Arsene Wenger and Sir Alex Ferguson in one of the Premier League’s golden ages alongside some of the best stars to ever light up English football, he played for France 40 times, alongside some of his country’s brightest talents. As if that’s not enough, he joined United from Inter Milan: talk about spoiled for choice…

FourFourTwo sat down with him to ask what a team of his best ever team-mates would look like.

“A great all-round goalkeeper. He was good with a ball at his feet and his distribution was excellent, so our attacks started with him. On and off the field, he was a professional guy.”

“Lilian was strong in one-on-one situations – his defensive skills were outstanding, and it seemed impossible to get past him. Although he scored a brace against Croatia in the 1998 World Cup semi-finals, he didn’t go forward much – those two goals were the only ones he ever scored for France!”

“Such a class defender. He was so powerful – physically a beast – but fast as well. He had quick feet, and that agility was impressive for a big guy like him. I was sad to see him leave Manchester United for Lazio in 2001.”

“He was called ‘The Rock’ for a reason! Marcel was very strong, and dominant in the air too. When he was at Milan he played in midfield, and even did that convincingly.”

“I played with Javier for a season at Inter in 1998-99 – he was like a machine who never stopped running. He also never lost the ball and always controlled it perfectly. His whole physicality was magnificent. He’d sprint up and down the field all game.”

“A great leader. Roy was a very good footballer, rarely gave the ball away and read the game well, which made him superb defensively. He had such a strong character, but I never saw it as a hindrance – you could feel he just wanted what was best for the team.”

“Paul was so good on the ball. Like Keane, he was a fantastic reader of the game, which also benefited him offensively. He was exceptional at dictating matches from midfield, making late runs into the box and scoring terrific goals – incredible volleys and long-range efforts.”

“Zizou was a special talent. He had a magic touch and was capable of some tremendous moves, tricks and finishes. Simply an amazing footballer – they don’t call him a maestro for nothing. He made everything he did on the pitch look easy.”

“Cristiano was extremely skilful, great in the air and also super-fast, both with and without the ball. After arriving at United from Sporting, he became addicted to his desire of becoming the best player in the world – he gradually grew into that mindset. After training, he would sometimes take a bag of balls and continue practising on another pitch alone, to improve his game. What’s amazing with him is that he’s been able to consistently play at the very highest level since joining United in 2003.”

“‘O Fenomeno’ was technically and physically gifted, and his repertoire of flicks and tricks was out of this world. The way he was able to control the ball was astounding, and he could make high intensity runs like no one else I’d seen before. Ronaldo could accelerate when he was already at full speed.”

“I played with Thierry [below] from when we were 15. Even then, he was already a brilliant striker; the captain of our team and a leader. I only saw him improve after that, especially at Arsenal, where he soon transformed from a winger into a No.9. Under Arsene Wenger, he became a better finisher – his acceleration with the ball was difficult to cope with as an opposition defender.”

“He had great man-management skills and was tactically strong, but he also had the capacity to give his assistants responsibility. That introduced the players to different routines and methods.”

Save over a third on a FFT subscription today (opens in new tab).