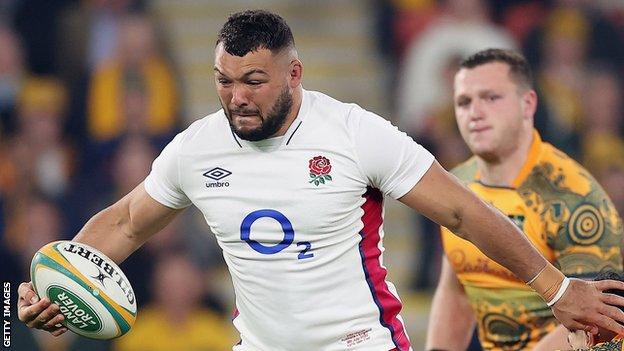 England produced an aggressive and resilient display to beat Australia in the second Test in Brisbane and take the three-match series to a decider.

England rallied and a sixth Farrell penalty enabled them to level the series and end a four-match losing run.

Eddie Jones’ side needed a much-improved display after a disappointing 30-28 defeat by 14-man Australia in the first Test.

The pack started superbly to dominate the first half and the team had enough composure to regain the momentum after sustained Australia pressure in the second half.

They now travel to Sydney for the deciding match next Saturday with the Ella-Mobbs Cup still up for grabs.

Prop Ellis Genge set the tone for England’s performance by bulldozing past Australia captain Michael Hooper in the opening minutes.

The tourists’ fierce tackling gave them a stranglehold on the game, and they turned territory into an early try when Vunipola was driven over the line from an England line-out.

With the Wallabies rattled by England’s ferocity, Farrell punished the home side with two penalties.

Continuing their relentless pace, Marcus Smith sought to release debutant Tommy Freeman but his pass was knocked forward by Izaia Perese who was sent to the sin-bin for a deliberate knock-on.

Jack Nowell ran out of room on the opposite wing as England stretched Australia’s defence to the limit.

Farrell kicked two more penalties but Jones’ side needed another try to underline their dominance.

Instead, Australia surged into England’s 22 for the first time and prop Taniela Tupou – nicknamed the ‘Tongan Thor’ because of his incredible size and power – smashed over the line to give the hosts a lifeline.

England suffered a further blow before half-time when lock Maro Itoje went off for a head injury assessment following a collision.

England get the job done

Farrell added another penalty at the start of the second half but the Wallabies, as they did in the first Test, showed their try-scoring flair, keeping the ball for phase after phase before releasing Kerevi to stroll over the line.

Smith was sin-binned for a deliberate knock-on as Australia cranked up the pressure, cutting England’s lead to five points with a penalty.

Australia, despite losing four players to injury in the first hour, were running the game, forcing England into frantic defence to prevent Tom Wright finishing a 60-yard kick and chase.

But with Smith back on the field and a new front row in place, England regained control. Nowell beat two defenders and fed Freddie Steward who was stopped yards from the line, and only further desperate defence denied Billy Vunipola a second try.

England had to settle for another Farrell penalty but his kick stretched their lead to a crucial eight points, enough to deflate Australia’s hopes of an unlikely victory.