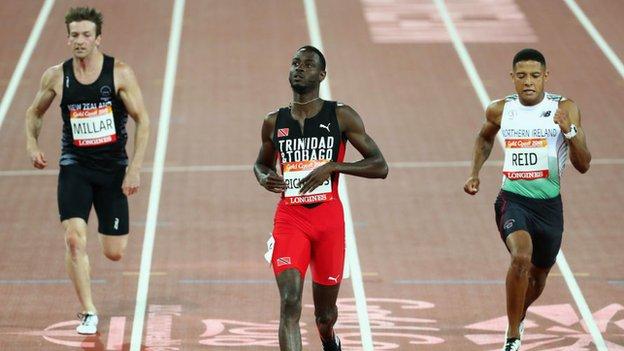 2018 Games medallist Reid was found guilty in February of allowing his flat to be used to produce crack cocaine.

The 27-year-old was handed a suspended sentence and ordered to do 220 hours of unpaid work by Bristol Crown Court.

Reid was named in Northern Ireland’s team but the Birmingham 2022 organising committee has now denied him entry.

“Leon had been selected by CGNI and had been entered into the 200m event prior to the 29 June deadline,” added the statement.

“Notification was subsequently received from the Birmingham 2022 Organising Committee that he would not be allowed to participate.

“Commonwealth Games NI is currently seeking clarity on any potential appeal mechanism, and the athlete has been offered well-being support as he deals with this news.”

Reid has competed for Ireland at the Olympic Games and the European Championships and Irish governing body Athletics Ireland said in May that it would continue to consider him for selection despite his criminal conviction.

Tokyo Olympic 200m semi-finalist Reid, 27, was one of 18 men charged last year with drugs and firearms offences, all of which he denied.

He was given a suspended sentence and 220 hours of unpaid work in February after being found guilty of allowing his flat in Bristol to be used for the crack cocaine production.

While Reid was nominated by Athletics Northern Ireland for the Birmingham multi-sport event and his selection endorsed by Commonwealth Games Northern Ireland, he faced a further hurdle with the overall organising committee having the power to prevent athletes from competing.

Primarily a 200m specialist, Reid set his personal best of 20.27 in 2018 which was the year he switched international eligibility from Great Britain to Ireland.

After winning his Commonwealth Games medal in April 2018, Reid reached the 200m final at the European Championships later that year in his first international appearance for Ireland.

Reid won Northern Ireland’s first athletics medal in 28 years when he claimed an impressive bronze in the 200m four years ago before reaching the semi-finals of last year’s delayed Olympics in Tokyo.