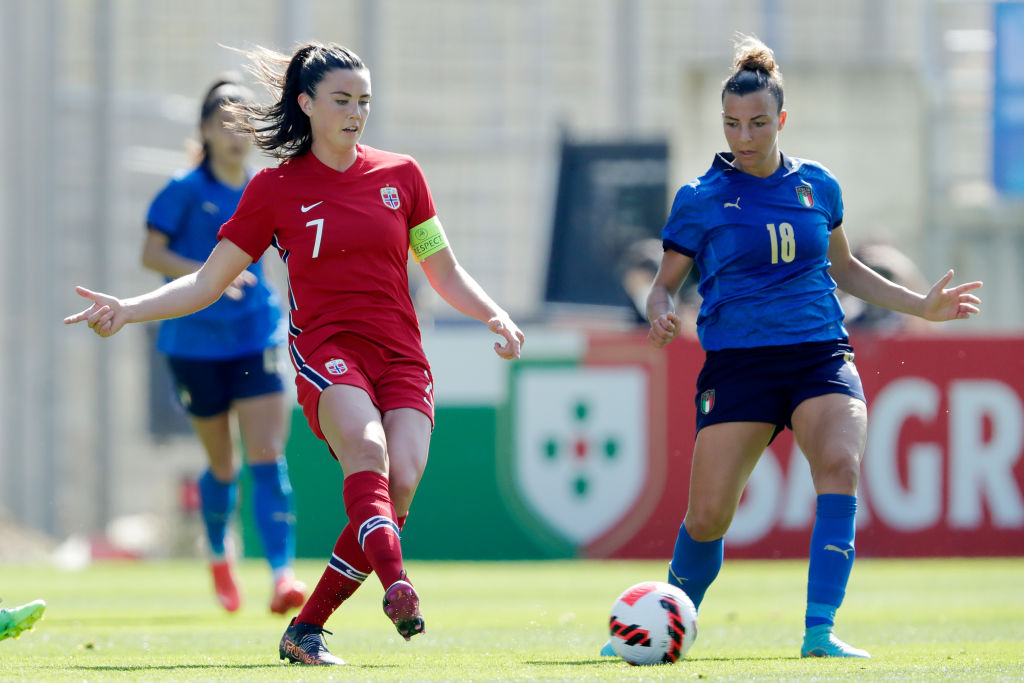 The final Norway Women’s Euro 2022 squad is yet to be revealed but here is who Norway most recently called up to their team.

The Norway Women’s Euro 2022 squad will be made up of 23 players, of which three must be goalkeepers. If a player becomes unavailable before the start of the tournament, whether through injury or illness, Norway will be able to select a replacement.

Norway have been boosted heading into Euro 2022 with the return of Ada Hegerberg to their squad. The former Ballon D’Or winner had stepped away from international duty in 2017 as a result of complaints about the support the Norwegian FA had provided the women’s team. With Hegerberg back in the side, Norway will be hoping they can relive some of their past glories. They won two European Championships in the 1990s and came runners up as recently as 2013, but in 2017, they exited the competition at the group stage, having lost all three matches without scoring a single goal.

Chelsea fullback Maren Mjelde has only recently come back from a knee injury sustained in the 2020/21 Continental Cup Final, returning to the pitch for Norway after over a year out. Whilst many have focused on Hegerberg’s return to the team as being a key boost for the Norwegians, Mjelde could be equally important as a calm presence at the back if she can return to full fitness in time for the tournament.

Ada Hegerberg might be the obvious answer here, but over the past couple of seasons Caroline Graham Hansen has managed to move past her injury issues and truly establish herself as one of the best attacking players in the world. Whether playing on the right wing for Barcelona or as a no 10 for Norway, Graham Hansen’s ability to glide past defenders should leave the other European teams feeling nervous.

Martin Sjögren took over as Norway manager in 2016, having led Linköpings to the Damallsvenskan title in Sweden. He oversaw their disappointing 2017 Euros as well as their run to the 2019 World Cup quarter-finals, where they lost to England.