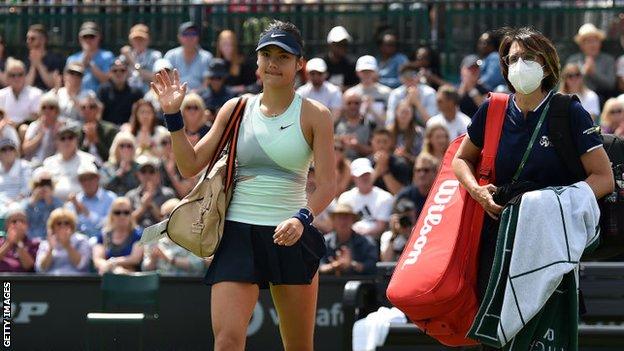 Emma Raducanu is expected to be fit for Wimbledon after a scan showed the injury which forced her to retire at the Nottingham Open was a side strain.

The US Open champion retired just seven games into her first grass-court match of the season in Nottingham on Tuesday.

The injury is not said to be serious, however she will not be able to play in next week’s WTA event in Birmingham.

The 19-year-old has been advised to rest for a few days and is likely to play in Eastbourne the following week.

“It was disappointing to go out this week with a side injury and unfortunately I will no longer be able to play in Birmingham,” Raducanu said.

“I’m looking forward to being back on the match court soon though to enjoy the rest of the grass season.”

The British number one said she had “no idea” if she would be able to recover in time for Wimbledon – which begins on 27 June – after sustaining the injury to her left side against Swiss world number 55 Viktorija Golubic.

It was the world number 11’s third mid-match retirement since her 2021 US Open win, having also bowed out of matches in Guadalajara in February and Rome in May with injuries.