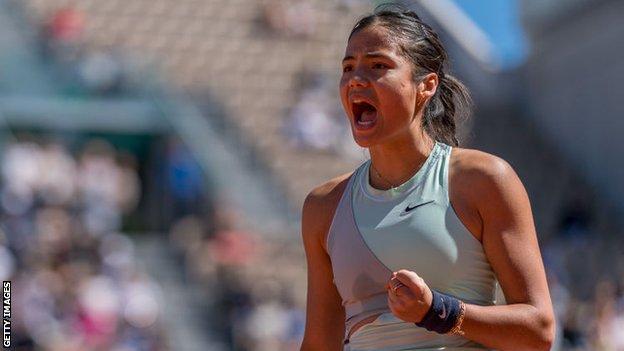 British number one Emma Raducanu says she will not rush a decision over appointing her next permanent coach.

The US Open champion, 19, will begin her grass-court preparations at the Nottingham Open this week.

“I want to take my time with this decision,” said world number 11 Raducanu, who plays Viktorija Golubic in her first-round match on Tuesday.

“Nothing has changed. I still have the same people, good people, around me. I don’t want to rush into anything.

“I’m still 19 and I’ve already won a Grand Slam so I can take my time and put things in place because I know my motivation isn’t any less.”

Raducanu played the first WTA match of her career at the Nottingham Open last year, before going on to become the first qualifier to win a Grand Slam three months later.

That US Open triumph came after the teenager reached the fourth round as a wildcard on her Wimbledon debut.

Nigel Sears was replaced by Andrew Richardson as coach after last year’s Wimbledon – but Richardson’s contract was not renewed despite Raducanu’s success in New York and Beltz was appointed in November.

The Briton received a wildcard to play at Nottingham after bringing her Wimbledon preparations forward following a second-round exit from the French Open last month.

Having battled a series of niggling injuries since her US Open triumph in September, she says she is feeling “really good physically” before her grass-court opener.

Reflecting on her progress over what she described as a “surreal” first year on the tour – which has included being asked to send the Queen a message for the Jubilee celebrations – she added: “I’m quite proud of what I’ve achieved in the past 12 months.

“I’m not being so hard on myself, I’m really enjoying my time right now and also just really believing in the work I’m doing.

“I don’t think anyone would say, ‘I wish I didn’t wish a Grand Slam at 18’ because that is what I set out to do when I started playing tennis – and I did that.

“For that to happen very soon definitely comes with a lot of challenges but managing, learning and growing through the adversities that I have faced – I would much rather have that, learn from those experiences and keep building and progressing.”