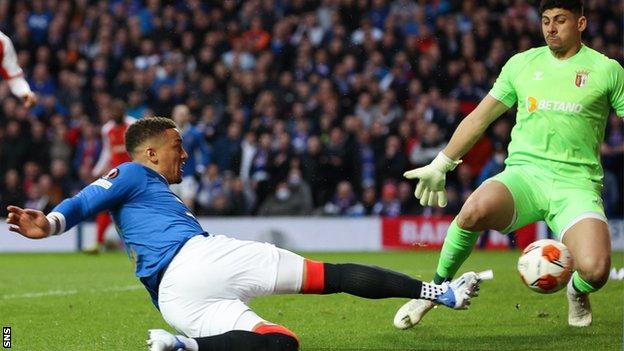 Rangers are into the Europa League semi-final after Kemar Roofe’s extra-time winner settled a pulsating tie with Braga, who finished with nine men.

James Tavernier’s early goal cancelled out the Portuguese side’s first-leg lead, before he had Ibrox on its feet again with a first-half penalty moments after Vitor Tormena was sent off.

Rangers were utterly dominant, hitting the woodwork twice and having three strikes disallowed, but their profligacy was punished when David Carmo’s header forced extra-time.

However, a tie with Leipzig was sealed when Roofe knocked in from close range.

And as Ibrox rocked, Braga’s hopes of another comeback wilted when Iuri Medeiros was booked and sent off for dissent for arguing over a yellow card.

Rangers will travel to Germany for the first leg on 28 April, with the Ibrox return the following Thursday, with the mouthwatering games either side of the final Old Firm derby of the season at Celtic Park.

It is Rangers’ first continental semi-final in 14 years, and a huge boost to Giovanni van Bronckhorst’s men ahead of Sunday’s Scottish Cup semi-final with Premiership leaders Celtic at Hampden.

And the prospect of a final against English Premier League side West Ham United remains alive, with David Moyes’ side facing Eintracht Frankfurt in the other last-four tie.

Choose your starting XI. It’s up to you how to approach it – you could go for the team you WANT the manager to pick or the one you THINK he will.