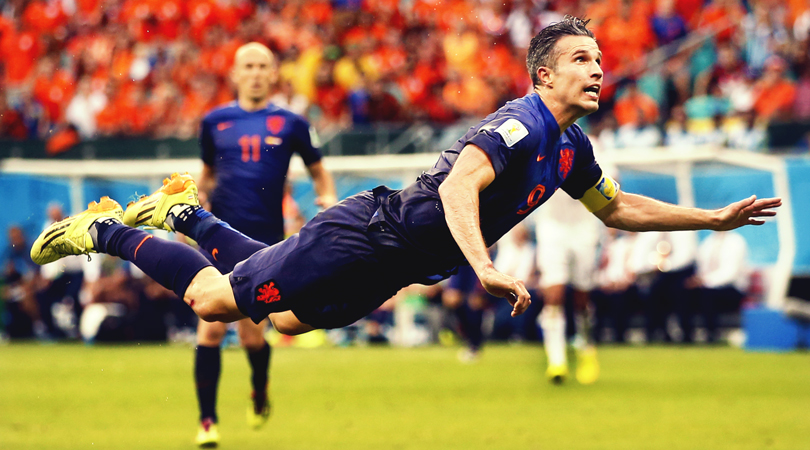 Who are the best Dutch players ever? It largely depends on your generation.

For a country of around 17 million people though, the Netherlands has punched well above its weight with the number of outstanding footballers it has produced over the years.

From the Total Football of the 1970s to the European champions of 1988 and a selection of 21st-century greats, there was no shortage of options when coming up with the following top ten.

The former Arsenal and Manchester United striker found goals easy to come by throughout his career, be it in the Eredivisie with Feyenoord, the Premier League – where he won the Golden Boot twice – in Turkey with Fenerbahce, or when pulling on the famous Oranje shirt.

Van Persie went to four World Cups and two European Championships with his country, starting every match during their run to the 2010 World Cup final and captaining them to the semi-finals four years later, scoring a spectacular diving header in a 5-1 win over Spain along the way.

He remains the Netherlands’ all-time top scorer, with 50 goals in 102 caps.

The Netherlands’ second most-capped player, Van der Sar lined up between the sticks 130 times during his 21-year international career.

The lanky goalkeeper was a two-time European Goalkeeper of the Year winner, a European and multiple league champion with Ajax and Manchester United and boasts the record for the longest streak without conceding at 1,311 minutes.

Robben was unstoppable in his prime, when infuriated opposition defences knew fine well that the Dutch winger would cut inside from the right wing and shoot on his lethal left foot, but were unable to do much about it.

The winger’s list of accolades is mightily impressive; he scored the winner in the 2013 Champions League final for Bayern Munich – one of 20 trophies he won in Bavaria – and lifted league titles with PSV, Chelsea and Real Madrid too, as well as firing the Netherlands to the World Cup final in 2010 and third place four years later.

The classy midfielder was a key part of one of the greatest club teams European football has ever produced, Arrigo Sacchi’s all-conquering AC Milan of the late ‘80s and early ‘90s, where he won two consecutive European Cups in a Dutch-flavoured side featuring his international team-mates Ruud Gullit and Marco van Basten.

Rijkaard was also crucial to the Netherlands’ only major international honour when they won Euro 1988, earning a place in the Team of the Tournament.

Neeskens was one of the stars of a Dutch side that is widely considered one of the best – if not the best – international teams to never win a major honour.

The former Ajax and Barcelona midfielder scored the opening goal in the 1974 World Cup final, but it was one of two finals in a row that the Netherlands would lose, to West Germany and Argentina respectively.

Nevertheless, Neeskens enjoyed a hugely successful career, winning domestic and European titles at club level, and he’s remembered as one of the best in his position of all time, and one of the earliest box-to-box midfielders.

The Arsenal legend’s ability to conjure spectacular goals out of thin air made him one of the most exciting strikers ever to grace the Premier League, and a key figure during the Gunners’ glorious era of success around the turn of the century under Arsene Wenger.

Bergkamp also scored one of the greatest ever World Cup goals against Argentina as the Netherlands reached the semi-finals of France ’98, the year he became his country’s all-time top scorer – before later being surpassed by Memphis Depay, Patrick Kluivert, Klaas-Jan Huntelaar and Van Persie.

Where Koeman went, trophies followed. A versatile operator capable of playing in defence or midfield, and scoring a boatload of goals along the way, the Dutchman won the European Cup with PSV before scoring the winner for Johan Cruyff’s Barcelona ‘Dream Team’ when they beat Sampdoria to secure European glory.

Koeman’s legendary legacy is also down to his contribution to the national team; he was named in Team of the Tournament when the Netherlands won Euro 1988, scoring a penalty to help knock out hosts West Germany in the semi-finals.

Gullit’s distinctive dreadlocks could be seen all over the pitch, from defence to midfield to attack, and the 1987 Ballon d’Or winner possessed levels of versatility and elegance that few, if any, players have matched before or since.

Starting as a sweeper at Feyenoord, Gullit then became a midfield playmaker, before playing wide in a front three or as a trequartista at AC Milan.

A double European champion with the Italian side, he was also the first and only Dutch captain to lift a major honour, scoring in a 2-0 win over the Soviet Union in the final of Euro 1988.

Given the weight of that haul, it’s amazing to think that Van Basten could’ve achieved even more were it not for injury cruelly ending his career at the age of 28.

A pure centre-forward with an unstoppable instinct for goals, he was dangerous with either foot and capable of finding the net from almost anywhere – as his most famous strike, the ludicrous angled volley in the triumphant Euro 1988 final, demonstrated emphatically.

Cruyff was more than just a footballer; the Dutch great was a visionary whose ideas helped change the game.

The Amsterdam native helped dream up the fluid, modern ‘Total Football’ concept along with coach Rinus Michels, and it brought staggering success as Cruyff won 18 major honours, including three consecutive European Cups, with Ajax between 1971 and 1973, as well as three Ballon d’Ors.

He went on to revolutionise Barcelona too, helping the Catalans end a 14-year wait for a La Liga title, while he was the figurehead of arguably the greatest national team never to win a World Cup – the Netherlands team of 1974.

Cruyff’s influence would extend well beyond his playing career, but he remains one of the greatest ever to step onto a football pitch.