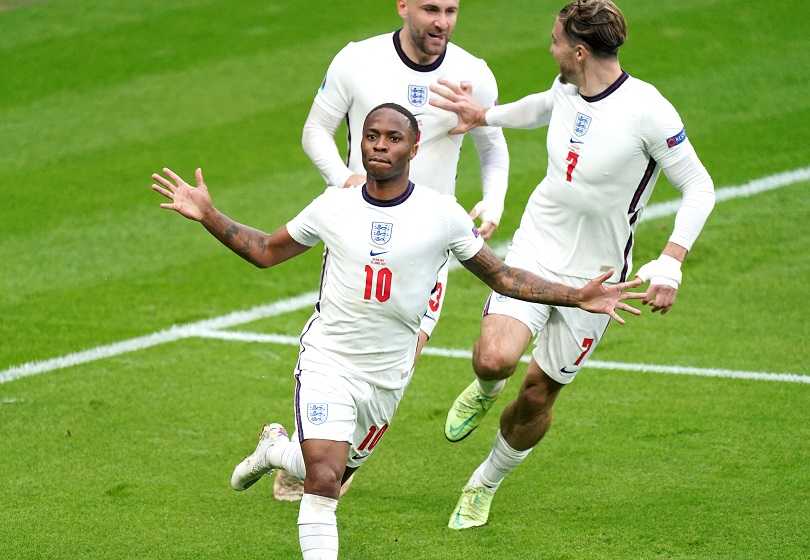 Who is the greatest English player ever?

It’s a debate that has rolled on for years and through generations, but here’s our take on the eternal question.

From world champions to generational talents and modern-day greats, here’s our run-down of the best 25 male players to pull on a Three Lions shirt.

Among the most decorated English players of the 21st century, Sterling has won four Premier League titles with Manchester City – along with the FA Cup and four League Cups.

The versatile former Liverpool forward starred throughout England’s run to the final of Euro 2020, scoring three goals – most notably the opener as Gareth Southgate’s side beat Germany 2-0 in the last 16.

He’s been retired for nine years now, but Owen remains 10th on the all-time list of Premier League top scorers.

After bursting onto the scene with Liverpool, he announced himself to the international stage with that solo goal against Argentina at the 1998 World Cup – one of 40 he scored for the Three Lions in all (only five players have notched more).

One of the finest defenders English football has ever seen, Terry is also the highest-scoring centre-back in Premier League history – finding the net 41 times for Chelsea, more often than not with his head.

He captained the Blues to five top-flight titles and Champions League glory (somewhat infamously lifting the trophy in full kit despite being suspended for the final) – and briefly wore the armband for England.

Quite possibly the most gifted English player of his generation, Hoddle made himself a legend at Tottenham and has been named as the club’s best-ever player on numerous occasions.

A magician with the ball at his feet, he was a mainstay of Bobby Robson’s England side during the 80s – when he also reached number 12 in the charts with ‘Diamond Lights’, a duet with teammate Chris Waddle (because of course).

After making a name for himself at Watford, Barnes took his wing wizardry to Liverpool and helped the Reds to two league titles.

Born in Jamaica, he earned 79 England caps – and it was during a 1984 friendly that he produced the most iconic moment of his career (bar the ‘World in Motion’ rap, obviously), gliding through Brazil’s defence at the Maracana to score arguably the Three Lions’ greatest goal (with his weaker right foot).

During his trophy-laden career at the top level, Lampard redefined what it meant to be a goalscoring midfielder; with 177 goals (two more than Thierry Henry), he ranks sixth on the all-time Premier League list.

The Chelsea legend won six caps for England (only five players have ever earned more) – who never quite cracked the conundrum of how to partner him effectively with his great contemporary, Steven Gerrard.

The first player to reach 100 caps for their country, Wright captained England 90 times (a joint record alongside Bobby Moore) – wearing the armband at the 1950, 1954 and 1958 World Cups.

At club level, the centre-half spent his entire career with Wolves – where he was skipper for all three of the club’s First Division titles and featured in some of the earliest European matches: the famous floodlit friendlies at Molineux.

Another Premier League legend who loved a goal from midfield, Gerrard will forever be synonymous with Liverpool’s 2004/05 Champions League triumph – from that goal against Olympiacos to that night in Istanbul.

But he’s also the fourth most-capped England player of all time, having turned out for his country 114 times during a 14-year international career which saw him appear at five major tournaments – and serve as captain under Roy Hodgson.

After fighting in the Second World War, Finney went on to become one of the finest players on the planet during the mid-20th century – spending almost his entire career with Preston North End and representing England 76 times.

A selfless forward known for his assists as much as his goals, club teammate Bill Shankly called him simply “the greatest player I ever saw, bar none”.

A member of the ‘Class of ‘92’, Scholes’ midfield mastery proved pivotal to Manchester United’s sustained success under Sir Alex Ferguson; the diminutive playmaker made 718 appearances for the Red Devils, scoring 155 goals.

His England career was relatively short – he retired from international duty seven years before his (first) retirement from the game outright – but he made some notable contributions, such as bagging both goals in the Euro 2000 play-off win over Scotland at Hampden Park.

Think of Shilton and you instantly think of Diego Maradona outjumping him to score his infamous ‘hand of God’ goal – but England’s most-capped player (125 caps) was one of the best goalkeepers of his generation.

As well as featuring for the Three Lions at three World Cups and two Euros, he twice lifted the European Cup with Nottingham Forest – and made a whopping 1,0005 league appearances for eight clubs overall.

A player ahead of his time, Ferdinand’s ball-playing ability and athleticism set him apart from other English centre-halves around the turn of the century.

The most expensive defender not once but twice, he enjoyed a glittering 12 years with Manchester United (who he joined from arch-rivals Leeds) and had a short stint as captain of England – for whom he won 81 caps between 1997 and 2011.

A European cup winner and three-time top-flight champion with Liverpool, Keegan went on to become one of England’s biggest hits abroad after joining Hamburg in 1977 (for his trendsetting perm as well as what he did on the pitch).

But the two-time Ballon d’Or winner – who captained his country on 31 occasions – is most synonymous with a certain moment from his managerial career: that 1996 rant in the direction of Sir Alex Ferguson…

An Invincible by the age of 23 with Arsenal and a winner of, well, pretty much every other trophy going at Chelsea, Cole has a claim to be one of the most complete full-backs ever.

The left-back combined intelligence and athleticism, attacking forays with defensive solidity, and even once forced Cristiano Ronaldo to ask to be substituted after the Portuguese had a nightmare against the Blues man in 2006.

“Stanley Matthews taught us the way football should be played,” said Pele; “I couldn’t believe he was just a man. He was the best player in the world,” opined Bobby Charlton.

One of the game’s all-time greats, ‘The Wizard of the Dribble’ – who famously played professionally until he was 50 – gained legend status at both Blackpool and hometown club Stoke City, and played in the 1950 and 1954 World Cups.

England’s principle attacking threat in the latter half of the 80s, Lineker has scored more World Cup goals than any other Three Lions player – and scooped the Golden Boot at the 1986 tournament.

Famously never booked, the current Match of the Day anchor’s club career took him from boyhood club Leicester to Everton, Barcelona, Spurs – with whom he won the FA Cup in 1991 – and Japanese outfit Nagoya Grampus Eight.

Undoubtedly one of the very best strikers on the planet right now, Kane is well on his way to making goalscoring history in multiple ways.

Tottenham’s main man needs just 19 more goals to surpass the legendary Jimmy Greaves as Spurs’ all-time leading scorer and only four to pass Wayne Rooney as likewise for England – while Alan Shearer’s longstanding record of 260 Premier League goals also ought to be within his reach.

Unstoppably prolific at his peak, Shearer won the Premier League Golden Boot in 1994/95, 1995/96 and 1996/97 – firing Blackburn to the title as one half of the ‘SAS’ partnership with Chris Sutton in the former.

A legend at Ewood Park and even more so at boyhood club Newcastle – where he spent the last decade of his career – he found the net 30 times in 63 games for England, including five to finish as top scorer at Euro 96.

For over a decade, Beckham was the face of the England team – captaining them for six years and making headlines for reasons good (that free-kick against Greece) and bad (that red card against Argentina).

Synonymous with pinpoint crosses and laser-guided set-piece deliveries, he turned out almost 400 times for Manchester United – with whom he won six league titles and the Champions League – before spells with Real Madrid, LA Galaxy, AC Milan and PSG.

A supremely talented player and an equally brilliant character, ‘Gazza’ was the great entertainer of the England team throughout the 90s – not least when football came home at Euro 96.

From tears in Turin to that glorious goal against Scotland (followed by one of his various notable celebrations, the ‘dentist’s chair’), his was career – which, at club level, saw him turn out for local team Newcastle, Spurs, Lazio, Rangers and more – full of indelible moments.

They said he was as ‘safe as the Banks of England’ – and if you’ve seen his ‘save of the century’ from Pele at the 1970 World Cup, you’ll understand why (if, somehow, you haven’t, correct that right away!).

The man between the sticks for England’s finest hour – their 1966 World Cup triumph, of course – was named FIFA Goalkeeper of the Year six years in a row between 1966 and 1971, while the IFFHS ranked him as the second-best ‘keeper of the 20th century – behind only Lev Yashin.

English football will probably see another striker like Jimmy Greaves; the Spurs and Chelsea legend chalked up a record 357 top-flight goals and finished as First Division top scorer no fewer than six times.

Injury during the group stage meant he lost his place to Geoff Hurst at the 1966 World Cup – not featuring in the final and not even receiving a winners’ medal until a FIFA rule change 2009 – but he remains one of the Three Lions’ most efficient scorers with 44 goals in 57 caps.

When Rooney burst onto the scene as a 17-year-old with his now iconic last-minute winner for Everton against Arsenal, it felt as though English football had just been introduced to someone very special indeed.

And so it proved as he went on to become record scorer for Manchester United – scoring some more of the Premier League’s most memorable goals in the process (who could forget his outrageous Manchester-derby winning overhead kick or thumping volley against Newcastle?) – and England, both of whom he captained.

England’s World Cup-winning captain, Moore was an absolute Rolls-Royce of a player – with his prowess at the back summed up by Pele calling him the greatest defender he ever faced.

The first footballer to win BBC Sports Personality of the Year, his name will forever be etched into the history of the national team and West Ham – with whom he spent 16 years, captaining them to FA Cup and Cup Winners’ Cup success in 1964 and 1965 respectively.

“Nobody embodies the values of Manchester United better than Sir Bobby Charlton,” notes the club’s official website about one of the ‘Busby Babes’ – who, having survived the horror of the Munich Air Disaster, became a legend on the domestic, European and international stages.

A winner of three First Division titles, the European Cup (as United became the first English team to triumph in the competition in 1968) and – of course – the 1966 World Cup, his name will forever be synonymous with the English game.