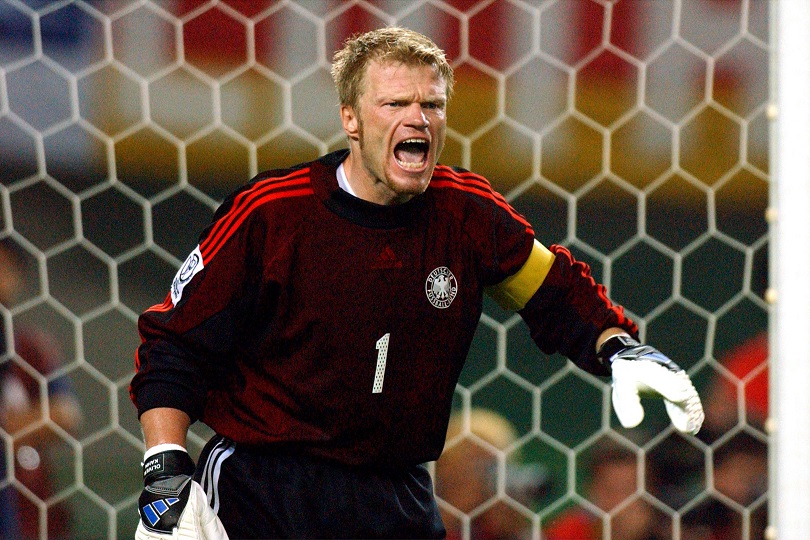 Germany are one of the great footballing nations. Whether it’s cheap tickets in the Bundesliga or mulleted marvels on the international stage, there’s no denying Deutschland have done as much to enrich football culture as anyone.

But who are the greatest German players of all time? We run you through our top 10. When the likes of Jurgen Klinsmann, Matthias Sammer ad Rudi Voller don’t make the cut, you know they’ve been doing something right…

Nicknamed Der Titan for his imperious, intimidating displays between the sticks, Kahn remains one of the great goalkeepers in modern history. In more than 600 appearances for Bayern Munich, the colossus won eight Bundesliga titles, six DFB-Pokals and a Champions League. While for the Nationalmannschaft, Khan was part of the squads that won Euro 96 and reached the World Cup final six years later.

The biggest of big game players, Kahn remains the only goalkeeper to win the Golden Ball at a World Cup, after inspiring Deutschland all the way to the final in Japan in 2002. Despite making an error in their eventual defeat to Brazil, Kahn’s spectacular displays that summer remain the benchmark by which all goalkeepers are judged in Germany.

The captain of (West) Germany’s first World Cup victory in 1954, Walter was an elegant and devastating attacking midfielder equally capable of scoring and providing goals. Walter scored 33 goals in 61 appearances for Germany but, in truth, it was for boyhood club, Kaiserslautern, where he’s still most revered.

The second-tier side’s stadium, built in 1985, was named in the honour of the man who spent his entire career at the club, scoring 357 goals in 364 league games. Walter was known for his love of playing in the rain, so much so that “Fritz Walter Wetter” remains a commonly used phrase in Bundesliga vernacular; describing shambolic playing conditions.

There are far better footballers on this list than Miroslav Klose. In fact, there are far better Germans than the man born slap bang in the middle of Poland. That being said, few could match the target man for International efficiency. Klose remains Germany’s all-time top scorer – with 71 goals in 139 appearances – as well as the most prolific marksman at World Cups, with 16.

Klose’s domestic record was solid, if unspectacular, with 258 goals in 667 matches for a clutch of European clubs. He won two Bundesliga titles, with Bayern, as well as a Coppa Italia with Lazio. Without his international career, he was a decent player. With it, he’s a bonafide legend. We couldn’t possibly leave him out.

The man often credited with changing an entire position. In truth, Neuer certainly didn’t invent the sweeper-keeper role – with countless examples having gone before him – but there’s no denying the Germany and Bayern captain perfected the art.

Neuer is so good with his feet, Pep Guardiola famously had to be talked out of fielding him in midfield during his time in Bavaria. The 36-year-old has been the bedrock of two trebles at Bayern, in 2013 and 2020, as well as the club’s 10 consecutive league titles since the former year. There have been recurring calls for Neuer to lose his No.1 status with the national team in recent seasons, but the 2014 World Cup winner is just as key as ever for Hansi Flick’s side.

Nicknamed ‘Karajan’, after the esteemed Austrian classical conductor, Netzer was a player of rare intelligence, balance and technical genius, considered by many to be the greatest passer in German history. With the national team, Netzer was part of the sides that won Euro 1972 and the World Cup 1974 – finishing third in the Ballon d’Or following the former triumph.

With his good looks, flowing blonde hair and playboy lifestyle, the midfielder could frustrate those who picked the teams, but football fans awarded him god-like status. The maverick midfielder orchestrated Gladbach’s back-to-back Bundesliga triumphs in the early-70s, before moving to Real Madrid and doing the same thing later in his career.

One famous incident sums up Netzer more than any other. During the 1973 DFB-Pokal final, the playmaker – who started on the bench after reportedly telling his manager he was off to Spain that summer – removed his tracksuit and informed the gaffer “I’m going on to play now” during extra-time. He organised his own introduction and scored the winner before jetting off to Los Blancos. For him, it really was that easy…

The undisputed star of German football in the 1960s, Seeler would certainly top another FFT list should we ever do it: the best statues in world football. An enormous stone carving of Seeler’s bare right foot stands proudly outside Hamburg’s Volksparkstadion. It’s just reward for scoring 490 goals in 580 HSV appearances. The three-time German Football of the Year was known for his strength, leadership, aerial ability and – surprisingly for such a big boy – his acrobatic overhead kicks.

Seeler’s irrepressible goal scoring instincts fired HSV to the German title in 1960 and a DFB-Pokal three years later. His 43 goals in 72 international appearances also brought West Germany within touching distance of the 1966 World Cup. A distraught Seeler being helped off the Wembley turf is one of the most iconic photos in football history.

Short, not particularly strong, fast or aggressive – you’d be forgiven for mistaking Philipp Lahm for an accountant instead of one of the greatest players ever. The Bayern stalwart might have lacked physicality, but he made up for it with a staggering football IQ. “He’s one of the most fantastic players I’ve ever trained in my life,” former Bayern coach Pep Guardiola once said of the 5ft7 utility man. “Even talking about the most intelligent players, he is one of them.”

Lahm was rejigged from scuttling right-back to midfield orchestrator after the Catalan coach’s 2013 arrival and was arguably the best in the world in both positions for several seasons thereafter.

Lahm won eight Bundesliga titles, six DFB-Pokals and a Champions League with the Bavarian giants, but his greatest moments came on the international stage. Eight years after his stunning strike against Costa Rica at the 2006 World Cup on home soil, Lahm lifted the trophy as captain of the Nationalmannschaft. That 2014 team is probably the greatest in German history; Lahm might have been the pick of the bunch.

It seems mathematical impossible that Mattheus played in both Euro 1980 and Euro 2000, but *checks notes again* he really did. Victorious in that first tournament and captain for West Germany’s triumph at Italia 90, Matthaus even found time to miss Euro 96 during that remarkable run.

A midfielder, sweeper, leader and winner boasts more caps (150) than any German man and more World Cup appearances (25) than anyone in the world. Diego Maradona called him his “fiercest competitor” and former Bayern coach Giovanni Trapattoni ranked him above Michel Platini and the aforementioned Argentine. “There was a hierarchy at Bayern,” former Bayern striker Giovane Elber once told FFT. “Lothar was the big dog.”

Mattheus was the brains and brawn for every team he represented – whether it was the all-conquering Bayern of the ‘80s and late ‘90s or a sublime Inter Milan side that lifted the league and UEFA Cup titles in between.

Teased for being short and fat as a youngster, Muller’s schooling as an apprentice weaver in small-town Bavaria is credited with developing the stocky, powerful physique which later made him a wrecking ball in the penalty box.

Nicknamed Der Bomber by German football fans for his ability to destroy defences, Muller notched 365 goals for Bayern in 427 appearances – a rate of 0.85 goals per game. Known for his strength, powerful shot and acceleration, Muller is also Germany’s second-highest scorer with 68 goals, three behind Miroslav Klose (71), despite having played 75 fewer games.

Muller remains both Bayern and the Bundesliga’s all-time record goalscorer. He also has the most hat-tricks for Germany, with eight. He held the record for the most World Cup goals (14) between 1974 and 2006, when it was broken by Brazil’s Ronaldo.

He was a stats machine; a cheat code of a striker during a time when pitches were terrible and yellow cards barely existed. He was the greatest goalscorer in German history.

Sweepers were already common in the ‘60s, but none had ever played the role quite like Beckenbauer. Not only did he dictate play from deep with his virtuoso passing range, he constantly surged forward with the ball, gliding past opponents to join in attacks. The libero role was born, with Der Kaiser its earliest proponent.

Beckenbauer won four league titles, four German Cups, three European Cups and two Ballon d’Ors with Bayern and added one more later in his career with Hamburg – evidence of his ability to turn any team into winners.

With the national team, the defender and captain was the driving force behind triumphs at Euro 72 and the World Cup two years later. No player has ever been as elegant, as calm in possession, as inspirational and as feared as Beckebauer. And no German is celebrated or revered so highly. He was and will surely forever remain the greatest player in German history.