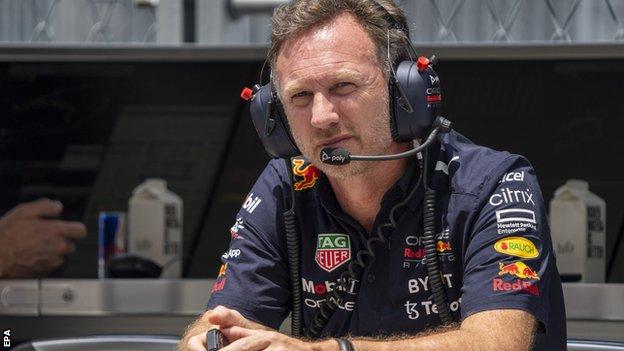 Red Bull have asked Formula 1’s governing body to launch an inquiry into what they say is Aston Martin copying their car.

Aston Martin have produced an extensive upgrade of their car for this weekend’s Spanish Grand Prix which bears a striking resemblance to Red Bull’s design.

The FIA told BBC Sport the matter had been referred to the stewards.

Aston Martin said the FIA had confirmed it was “legitimate independent work”.

Aston Martin have been struggling close to the back so far this season, while Red Bull are contesting the world championship with Ferrari.

Horner, whose car has sported that design since the second pre-season test in early March, said he was concerned because Aston Martin had poached a number of Red Bull staff members in recent months.

Among them is Dan Fallows, Red Bull’s former head of aerodynamics who was signed as Aston Martin’s new technical director last year but took up his post only in April after a settlement between the teams.

“Copying is the biggest form of flattery,” Horner told BBC Sport. “It is quite a thing to instruct your team to come up with a very close-looking clone of our car and of course a few people have moved over the winter period, and what you can’t control is what they take in their heads.

“But what would be of grave concern to us would be if any IP [intellectual property] had in any way changed hands.

“That is where we rely on the FIA to do their job, they research, they have all the access and we will be relying on them heavily to ensure that no Red Bull IP has found its way into that car.”

An Aston Martin spokesperson said: “We have shared details of our update with the FIA technical people.

“Having analysed the data and the processes used to create the update, the FIA has now confirmed in writing that our update was generated as a result of legitimate independent work in accordance with the technical regulations.”

The FIA said it had “carried out a routine pre-event legality check” of the Aston Martin, which focused “in particular [on] the topic of “reverse engineering” and potential illicit IP transfer”.

It said both Red Bull and Aston Martin had collaborated in the investigation, which “confirmed that no wrongdoing had been committed”.

It is not the first time Aston Martin have caused controversy by apparently copying a rival’s car.

In 2020, when they were competing as Racing Point, they were accused of producing a facsimile of the 2019 Mercedes.

At first, the FIA cleared the design, but after protests from rival teams Racing Point were docked 15 points and fined 400,000 euros for breaking the rules and illegally copying the brake ducts of the Mercedes.