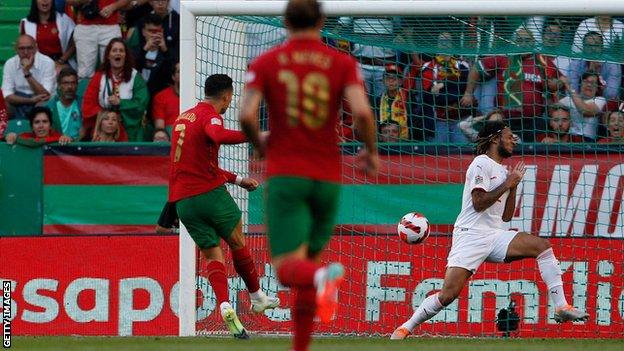 William Carvalho opened the scoring when he pounced after Ronaldo’s free-kick was only parried by Gregor Kobel.

Ronaldo smashed in from 12 yards after being teed up by Diogo Jota, who then played a part in the third as his shot was saved and Ronaldo reacted quickest.

Joao Cancelo completed the rout when he scored from 20 yards after Kobel raced out and failed to clear a through ball.

A late equaliser for Spain, who snatched a 2-2 draw in the Czech Republic, means Portugal go to the top of Group A2, above the Czechs on goal difference.

Those two sides meet in Portugal on Thursday, with the hosts having drawn 1-1 with Spain in their opening fixture.

Portugal were the winners of the inaugural Nations League in 2019 and will be hopeful of repeating that feat after making such a strong start to this season’s competition.

While this was a memorable night for Ronaldo, it was also an eventful evening for his fierce rival Lionel Messi, who scored five times for Argentina in a 5-0 friendly win over Estonia.

That takes Messi’s tally to 86 international goals – 31 behind Ronaldo’s record of 117.