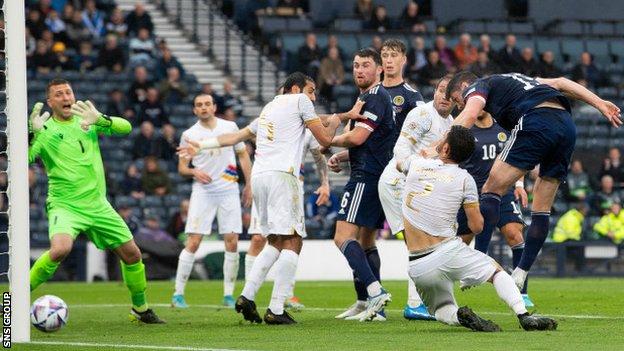 Anthony Ralston and Scott McKenna scored their first international goals as Scotland swept Armenia aside in their Nations League opener at Hampden.

A week on from the painful World Cup play-off defeat to Ukraine, Steve Clarke’s side were utterly dominant.

Headers from Ralston and McKenna made it 2-0 at halfway after Stuart Armstrong and Andy Robertson had gone close.

John McGinn rattled the crossbar late on but a third goal would not come.

With the rain tumbling down, Scotland created a flurry of chances in the first few minutes as Armstrong clipped the post and Robertson’s low strike was kept out by the fingertips of David Yurchenko.

Celtic full-back Ralston, making his first start, was at the heart of the early promise, setting up both chances with his strong running on the right.

A Jack Hendry header was easily saved and McGinn crashed a venomous free-kick a few feet too high as the one-way traffic continued.

On their way to victory over Republic of Ireland in sweltering conditions at the weekend, Armenia were content to sit back and surrender possession. In the Glasgow rain their cagey approach was even more pronounced as the visitors’ back five seldom ventured more than a few yards from the penalty box.

It was difficult to find a way through such congestion, so Armstrong went over the top to break the deadlock, the Southampton midfielder curling a sweet cross to the back post area where Ralston rose to nod in expertly.

A similar cross to the same area then found Che Adams, who knocked the ball into the path of Ryan Christie only for the Bournemouth forward to clatter an awkward half-volley into the stands when the net was gaping.

The second goal could not have been any simpler, with McKenna too strong for his opponent as he waited for a McGinn corner to dip on to his head inside the six-yard box.

The hulking Nottingham Forest defender, an assured presence all evening, was denied a second by VAR on the stroke of half-time when he strayed marginally offside to meet a header from Adams.

Scotland were slower out of the blocks after the interval, with Christie wayward with a header before the irrepressible Ralston had a shot charged down.

Ralston is a player reborn under the high-octane coaching of Celtic boss Ange Postecoglou. Having made one solitary appearance in 2020-21, this was the 23-year-old’s 49th game of this term.

And first starts for your country don’t get much better. He was a blur of perpetual motion up the flank and did not relent as some of his team-mates chose to preserve energy after the break.

There was a broad smile on Ralston’s face as he left the field to rapturous applause on 75 minutes – and not just because his withdrawal coincided with a torrential downpour.

Amid the stair rod rain, McGinn thundered a rising shot against the crossbar and a deflected Scott McTominay shot squirmed wide before another McGinn rocket whistled over.

Armenia, world ranked 53 places below Scotland in 92nd, had two breakaway chances all night, both culminating in comfortable saves for Craig Gordon.

Man of the match – Anthony Ralston

Scotland face far sterner tests in this group, with Ukraine due to cross their path twice again in September, but it was vital that Clarke’s men shrugged off the pain of that play-off semi-final defeat to get off to a winning start.

The manner of victory was emphatic too, with Scotland racing out of the traps and wrapping up the contest before half-time.

Another goal or two would have been a nice reward for the big Hampden crowd, but Clarke will be delighted with the response from his side after some scathing criticism.

The emergence of Ralston is a huge plus and six changes to the starting line-up speaks to a squad depth that will be important over the next two matches.

Scotland next travel to Dublin on Saturday (17:00 BST) before Armenia play hosts on Tuesday.