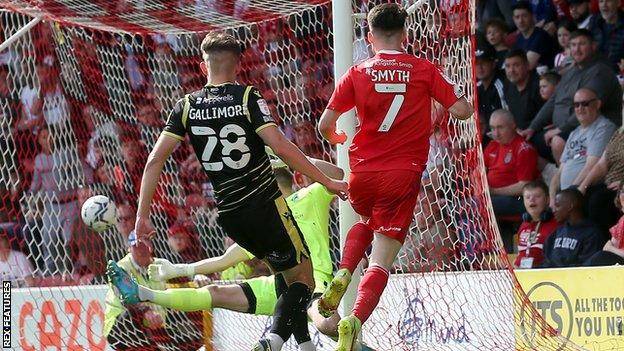 Scunthorpe United’s 72-year spell in the English Football League will come to an end as a 3-0 loss at Leyton Orient confirmed their relegation from League Two.

Paul Smyth cut in from the right wing, skipped past Ryan Delaney and arrowed a low shot past Rory Watson’s near post to put the O’s in front early on.

Orient doubled their lead six minutes later as Theo Archibald curled a left-footed effort into the far corner of the net from the corner of the 18-yard box.

Ruel Sotiriou found himself unmarked at the far post to head in Jordan Brown’s deep cross for Orient’s third as the Irons’ will buckled.

Sotiriou almost got his second seven minutes after the break, but he hit the post after Brown’s through ball, while Watson did well to deny Archibald after an hour and Hector Kyprianou crashed an effort off the Scunthorpe crossbar six minutes later.

In truth the writing has been on the wall for the North Lincolnshire side for the majority of a campaign where they have won just four league matches.

Since beating fellow strugglers Oldham 3-1 at Boundary Park on Boxing Day the Iron have won just once – a 1-0 win over Walsall on 8 February – and this loss at Brisbane Road was their seventh successive defeat.

They finished just one place above the League Two relegation zone in 2020-21 and their cause this campaign was hindered when they were placed under a transfer embargo in the summer.

Boss Neil Cox was sacked in November with the club bottom of League Two and replaced by former Rochdale, Barnsley and Bolton manager Keith Hill.

Hill lost just one of his first seven matches in charge but they never built up any momentum, and last spent a day outside the bottom two on 28 December.

Relegation out of the Football League will be hard to swallow for Iron fans, who saw their team play in the Championship in 2011 and compete in the League One play-offs as recently as 2018.

However, they were then relegated to League Two in 2018-19 and finished 20th in their first season back in the fourth tier.

With hopes of EFL survival drifting badly, boss Hill said after a home defeat by fellow strugglers Barrow on 15 March that he had to change “the culture” at the club.

“I’m trying to navigate this football club through some stormy moments to where I can build a positive future in a positive environment,” he told BBC Radio Humberside.

Though there is now certainty of what level the Iron will be playing in next season, the club’s next move behind the scenes is unknown.

Owner Peter Swann resigned as chairman last month and has acknowledged he is looking for someone to buy the club from him.

Lee Turnbull has returned to the club in the role of chief operating officer and Hill will now hope that he is given the chance to turn the club’s fortunes around.

A club with a storied history that can list legendary England internationals like Ray Clemence and Kevin Keegan among its most notable former players, in addition to club icons such as Jack Brownsword and Barrie Thomas, and even dual-sport star Ian Botham.

In recent times, the Iron punched above their weight in the Championship in the mid-to-late 2000s and flirted with it again under the management of Graham Alexander. Many fans believe his 2018 sacking was the start of the decline that’s brought them to this point.

Recruitment has been questioned in the past few years too, with many fans suggesting now-former chairman (but still club owner for the time being) Peter Swann had too much input, something he has refuted on several occasions.

Whilst some fans are angered by the current state of the club and this situation, many almost seem numb to it now and were resigned to their fate a long time before the dreaded (R) was placed next to their name on the league table.

And despite the consistent positivity from manager Keith Hill about the future of the club, I’m not sure the majority of Iron supporters share that sentiment as they’ve seen that the National League can quite easily turn into a giant abyss that has swallowed up clubs without a hint or whisper of a return to the Football League.

Maybe recent talk and suggestion of a takeover could provide the required impetus needed to at least provide the right resources to Hill and his team – and breathe new life back into a club in desperate need of it – but that will have to wait for another day.