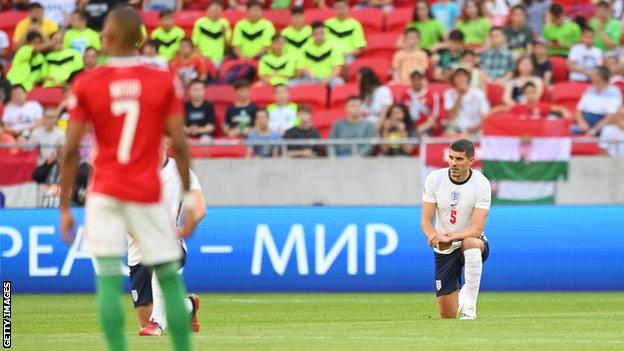 England boss Gareth Southgate has welcomed Germany’s decision to take the knee before the two teams meet in the Nations League in Munich on Tuesday.

“We’re two nations with huge numbers of mixed heritage nationals and I think it’s an important sign for everybody, so we welcome that,” said Southgate.

“We are united in our beliefs.”

England players were jeered for taking the knee before Saturday’s 1-0 defeat by Hungary, despite most of the crowd in Budapest being children.

Hungary were ordered by Uefa to play three games behind closed doors as punishment for discriminatory behaviour by their fans at Euro 2020.

But Saturday’s fixture saw over 30,000 spectators at the Puskas Arena as the Hungarian FA used a Uefa regulation that allows children up to 14 to attend for free if accompanied by an adult.

Hungary have also been ordered to play two games behind closed doors by world governing body Fifa because of racist abuse directed at England players during the World Cup qualifier in Budapest on 2 September.

Manchester City and Germany midfielder Ilkay Gundogan confirmed on Monday his national side would take a knee alongside England.

“We will go down on our knees together with the English because we want to support this whole initiative,” said Gundogan.

“We did this last year at the Euros and, of course, we will do it tomorrow too.”

Southgate’s side beat Germany on route to the Euro 2020 final last summer and he will be hopeful they can get their first win of the Nations League campaign to lift England off the bottom of Group A3.