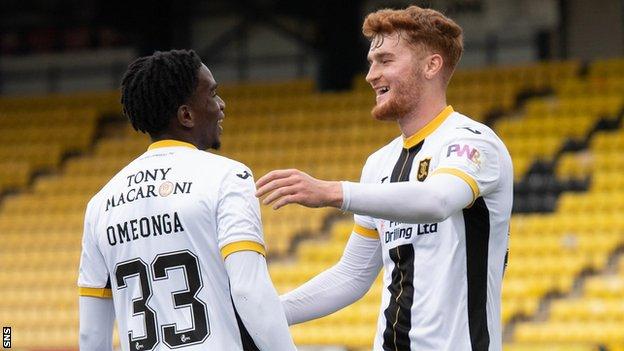 St Johnstone became the third Premiership side to exit the Scottish League Cup despite ending the group stage by beating Ayr United 1-0.

Hibernian and St Mirren had already been eliminated.

Ross County go through as group winners and Kilmarnock and Livingston as runners-up after their victories.

But third-tier side Queen of the South must wait for Sunday’s game between top-flight Aberdeen and Championship visitors Raith Rovers to see if they progress as one of the best runners-up.

Rovers must at least draw away to already-qualified group leaders Aberdeen – and win the penalty shoot-out bonus point – to take Queen of the South’s place in Sunday’s last-16 draw.

League 2 Stirling Albion moved above the Kirkcaldy side meantime after a 3-0 win over visitors Peterhead from the division above. However, a hat-trick from former Hearts striker Dale Carrick is not enough to keep them in the running.

Partick Thistle progress as group winners after a 4-2 defeat of League 1 visitors Montrose.

Fourth-tier Stenhousemuir briefly threatened to upset hosts Kilmarnock when Matt Yates’ free-kick off the underside of the bar cancelled out an early opener from Liam Polworth.

However, two goals from Oli Shaw, the first a penalty, and another from Daniel Armstrong sent the Ayrshire side through.

Ross County confirmed progress as group winners with a 7-0 hammering of East Fife, with the goals coming from five summer signings.

Dunfermline Athletic looked destined for progress after taking the lead through Chris Hamilton’s header, but an equaliser for their third-tier rivals Alloa Athletic from Conor Sammon, took the tie to penalties. And the Fifers were denied the bonus point that would have kept them in the running.

But goals from Jaze Kabia, Carlo Pignatiello and Grant Gillespie, from the penalty spot, secured a win for the Championship side.

Dick Campbell’s Arbroath have continued where they left off last season and ended their group with a 100% record after a 3-0 win over League 1 visitors Airdrieonians.

St Mirren finished off with a comfortable 3-1 win over League 1 newcomers FC Edinburgh.

Two summer midfield signings set them on the way within the opening 25 minutes. Former Motherwell man Mark O’Hara slotted a penalty after Jonah Ayunga was fouled before the former Morecambe player’s close-range finish. Ayunga headed his second after the break, with Danny Handling scoring in reply.

Queen of the South took second place behind Annan, and finished above St Johnstone on goal difference, after second-half goals from Kieren McKechnie and Ruari Paton secured victory away to fourth-tier Elgin City.

A long-range goal after two minutes from summer midfield signing Graham Carey saw St Johnstone beat Championship visitors Ayr United but it was not enough to take them through.

Roddy MacGregor’s header gave Inverness the lead before Mitch Megginson’s reply, both before the 20th minute.

Dundee secured progress with a 5-1 win over neighbours Forfar Athletic.

Striker Alex Jakubiak fired a three-minute double inthe first half before close-range finishes from Niall McGinn and Tyler French, all before the break.

Lyall Cameron added another after the interval before Stefan McCluskey’s reply.

Hamilton looked set to qualify thanks to Andy Winter’s early strike, but Championship side Queen’s Park replied through Jake Davidson with 12 minutes remaining to send the tie to spot-kicks.

A bonus point would have taken Queen’s Park through, but it was Accies who prevailed – only to fall short on goal difference.