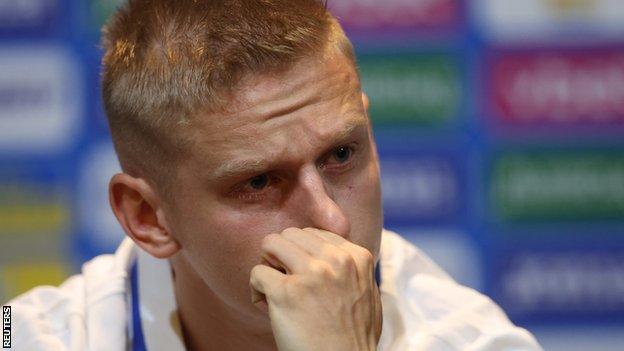 Oleksandr Zinchenko burst into tears on the eve of his team’s crucial World Cup play-off with Scotland as he vowed to give the Ukrainian people “incredible emotions” with victory.

The delayed play-off match will be Ukraine’s first since Russia launched its invasion in February.

A win would set up a meeting with Wales for a place at the World Cup in Qatar.

“I spoke to people from different countries, all over the world and I spoke to some Ukrainian kids who just don’t understand what’s happening back in Ukraine.

“They only want the war to stop. They have one dream to stop the war.

“When it comes to football, the team, we have our own dream. We want to go to the World Cup, want to give these incredible emotions to the Ukrainians because they deserve it so much at this very moment.”

Zinchenko, 25, has shown his emotions on and off the field since the war began and, sat inside Hampden Park with his coach Oleksandr Petrakov, he broke down when answering a question from a Ukrainian journalist.

He praised the welcome from the Scotland team and staff, as well as plans to distribute song sheets to home fans so they can join in the Ukrainian anthem.

Zinchenko, who won the Premier League title with City, added: “I would like to say as well that a lot of countries maybe don’t understand that – today it is Ukraine but tomorrow it can be you.

“So that’s why we need to be united and need to defeat aggression altogether.

“I am sure that the whole of Ukraine will be watching us. We will feel the support.

“We can talk a lot, but we need to prove everything on the field. We will try to make our people happy and proud.”