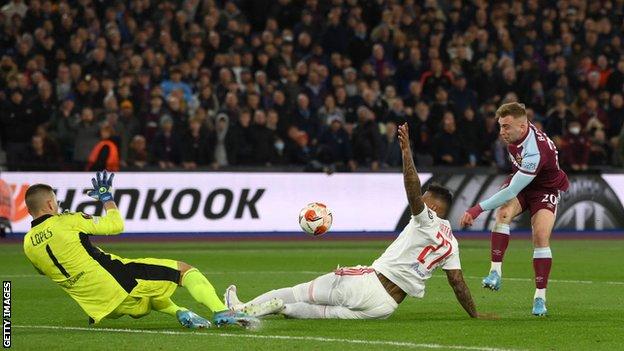 Ten-man West Ham kept their hopes of reaching a first European semi-final since 1976 alive by battling to a draw in the first leg of their Europa League quarter-final with Lyon at London Stadium.

Aaron Cresswell’s red card for bringing down visiting skipper Moussa Dembele when he was the last man in first-half stoppage time changed the complexion of a tie that David Moyes’ men were starting to grow into.

Despite the setback Jarrod Bowen put the Hammers in front seven minutes after the re-start when he seized on a Jerome Boateng mistake in his own box and finished on the turn.

But it was a rare glimpse of goal for the home side, who were forced to defend for long periods. Their defences were eventually breached by on-loan Tottenham midfielder Tanguy Ndombele, who tapped home from close range after the ball had been deflected into his path.

Alphonse Areola denied Emerson with a decent save as Lyon searched for a winner but West Ham held firm, with Craig Dawson particularly impressive in their rearguard action.

If there is any consolation given how the game unfolded, it is that the Premier League side are still in with a chance, unlike the last occasion West Ham reached a European quarter-final, when they were beaten 4-1 in the first leg at home by Dynamo Tblisi in 1981.

Rate players out of 10 throughout or after the game. The rater will close 30 minutes after the final whistle.

Rating range key1 = Give it up10 = Pure perfection