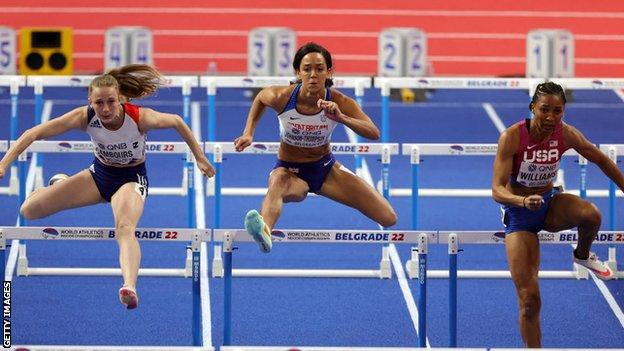 Britain’s Katarina Johnson-Thompson said “for me, this is a triumph” after she withdrew from the pentathlon at the World Athletics Indoor Championships.

Competing for the first time since injury ended her Olympic heptathlon in August, Johnson-Thompson was in sixth place after four events in Belgrade.

Having accepted a wildcard entry two weeks before the event, the defending champion chose to miss the 800m.

“I’m not scared to come out here and get beat. The most important thing was to not risk injury. Looking to the summer, this is the best preparation for me.

“World Athletics asked if we wanted the wildcard two weeks ago and training was going well, so I thought why not? For me this is a triumph – I can take so many positives from this,” added Johnson-Thompson, who said her “ultimate” target is the World Championships in July.

“I truly believe it’s competition rust. This has been six to eight weeks full training and I’m in good enough shape to contend. It has definitely motivated me for the summer and it’s what I needed.

“I needed to come out here and get stuck in because I haven’t in such a long time.”

Forced to withdraw at Tokyo 2020 after sustaining a calf injury in the 200m, Johnson-Thompson has since relocated to the US to train under new coach Petros Kyprianou.

She was evidently lacking in race sharpness as she finished sixth in her 60m hurdles heat, and was visibly frustrated as she failed to clear 1.86m in the high jump, before a throw of 13.02m in the shot put left her fifth at the end of the morning session.

The 2018 champion’s medal hopes faded in the long jump – a second leap of 6.08m the only one of three attempts landed – and she did not return for the closing event.

That final event saw compatriot Holly Mills finish an agonising fourth overall, marginally missing out on bronze by seven points despite a brave personal best in the 800m.

The 21-year-old, in fourth after four events, ran two minutes 09.97 seconds – having started the day with a 60m hurdles best of 8.15secs – to finish just behind American bronze medallist Kendell Williams.

“It’s painful to take,” said Mills. “Fourth is a gut-wrenching place to come. I ran my heart out and I gave it all I had. It was far from a perfect pentathlon but it’s all I had on the day.”

She added: “It sets me up really well for a good season. I think right now I just need to go and cry for a little bit and then tomorrow I can look back on what I’ve achieved. I’m proud of how far I’ve come.”

Neita aims to convert semi-final exit ‘into something great’

In the women’s 60m, Britain’s Daryll Neita and Cheyanne Evans-Gray saw their hopes ended in the semi-finals.

Two-time Olympic 4x100m relay bronze medallist Neita, a 100m finalist in Tokyo, qualified for the semi-finals by winning her heat in 7.13 seconds – but she was unable to improve in the semi-final, finishing fifth in 7.15secs.

“It wasn’t a good start. I tried to claw it back at the end but my finish wasn’t good enough today,” Neita said.

“I’m pretty excited with what I’ve achieved this indoor season. The World Indoors was a bonus. I’m super excited to take this shape into the outdoors [season]. I did [have my eyes on the final] but I’ll convert it into something great outdoors.”

Evans-Gray posted a personal best time of 7.19secs to finish sixth in her semi-final.

In the women’s 400m competition, Jessie Knight and Ama Pipi both also missed out on final places.

British champion Knight faced a nervous wait for confirmation of her semi-final qualification, having initially been disqualified after she was forced off the track on her way to placing second in her heat.

Reinstated, Knight produced a quick final lap but narrowly missed out on one of the three qualifying places for the final, finishing fourth.

The 28-year-old European indoor record holder ran a controlled race, moving to the front on the final lap to win his heat in seven minutes 54.90 seconds.

Compatriot Jamaine Coleman’s time of 8:12.76 saw him finish 11th in his heat, as Ethiopia’s Lamecha Girma set a fastest time of 7:46.21 across the three races.

There was huge disappointment for the in-form Elliot Giles, who was forced to withdraw before his 800m heat.

With the top two in each heat to qualify for the final, third-placed Guy Learmonth ran 1:49.13 and missed out by 0.36 seconds behind American Bryce Hoppel – while Charlie Grice finished sixth in his heat in 1:50.17.