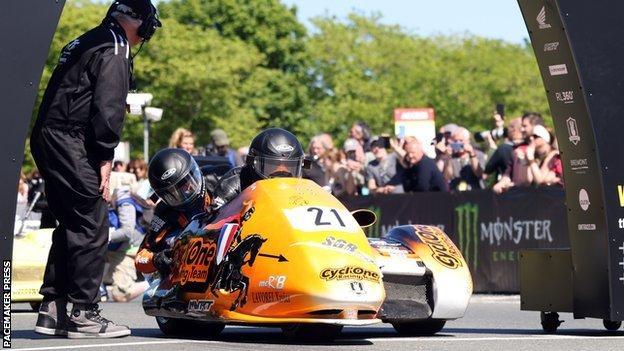 Isle of Man TT race organisers have confirmed that they named the wrong French sidecar competitor to have died in an incident on Saturday.

In a statement, they said rider Cesar Chanal had now been confirmed as having died in the crash during lap one of the first sidecar race of 2022 on the Mountain Course.

On Saturday, they wrongly said passenger Olivier Lavorel had died.

He remains in a critical condition in Aintree Hospital in Liverpool.

In the statement, organisers said: “An initial identification procedure was conducted using established procedures and would appear to have resulted in a mistaken identification.

“We now believe it was Cesar Chanal who died at the scene of the accident on Saturday 4th June. Olivier remains in a critical condition and continues to receive treatment.”

Both competitors’ families had now been informed and a “thorough review of the processes relating to the identification of competitors will take place in due course,” it added.

The incident took place less than a mile from the start line between the bottom of Bray Hill and Quarterbridge.

It led to the race being red-flagged, and the remainder of the day’s schedule abandoned.

The races are organised by ACU Events Limited on behalf of the Isle of Man government’s Department for Enterprise.

The statement by organisers added: “One of the competitors sustained injuries that would not support life and was sadly declared dead at the scene. The second competitor was unconscious with severe injuries.

“The injured competitor was treated at the roadside before being transferred to Noble’s Hospital, and then airlifted to a specialist hospital in Liverpool to receive treatment.

The statement concluded: “Our thoughts are with the family and loved ones of both Olivier and Cesar at this truly devastating time.

“We ask that people do not speculate on social media.”

Although new to the TT, the pair have been regular competitors in the French F1 and F2 National Sidecar Championships, recording several podium finishes.

Two other competitors have died during the 2022 Isle of Man TT.