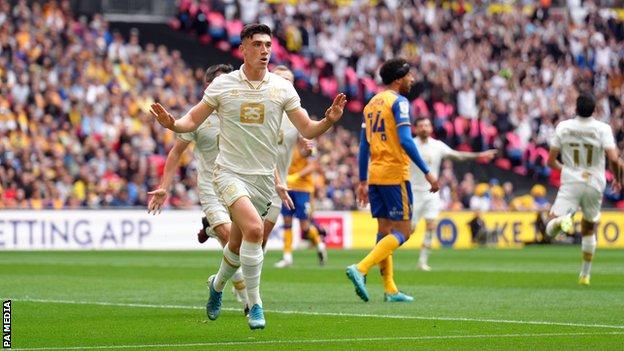 Port Vale sealed their return to League One in devastating fashion at Wembley, brushing 10-man Mansfield Town aside in an emotion-charged play-off final.

Two headed goals in four astonishing first-half minutes from 19-year-old Kian Harratt and James Wilson had the Valiant support in euphoric voice in their first trip to Wembley for 29 years.

Connor Hall cleared a Rhys Oates effort off the line before the break to deny the Stags a way back into the game.

That was as close as they would get as Mansfield-born Port Vale manager Darrell Clarke, who spent time away from the club following a family bereavement in February, capped an emotional season in glorious fashion at the home of English football.

A late third from Mal Benning, who made more than 250 appearances for Mansfield before joining Port Vale last summer, completed an electrifying performance and compounded Mansfield’s woes.

Port Vale had Aidan Stone to thank for denying Jamie Murphy an early opening goal from point-blank range after the winger capitalised on a defensive mix-up.

While it would be a celebrated save, it was also a costly miss for the Stags, bidding for a return to the third tier for the first time in 19 years, that Port Vale ruthlessly punished.

With a brilliant diving header to meet a Benning cross, Harratt put Clarke’s side ahead in the 20th minute just moments after crashing a shot off the foot of the post.

Stags’ hopes took another heavy knock 11 minutes later when Hawkins was sent off following a second yellow card in five minutes for a reckless tackle on Wilson.

Stones’ failure to control a free-kick from Stephen McLaughlin allowed Oates and the Stags a glimpse of a comeback, as he squeezed a close-range shot underneath the goalkeeper, but Hall got back to clear off the line.

Port Vale searched for a third goal after the break and had the ball in the back of the net twice more, but Harratt and Harry Charsley both had their efforts waved away for offside.

Those calls meant the Stags remained a threat, and it took a great save from Stone to keep Oates out at the other end before Benning’s fine volleyed finish against his former side underscored an emphatic win.

For Port Vale boss Clarke, victory against the club where he started his playing career and made more than 170 appearances brought an end to a personally challenging campaign.

He led Vale onto the Wembley pitch in what was his 11th game since returning from six weeks of compassionate leave following a family tragedy.

Before the game – the Valiants’ first at Wembley since the Anglo-Italian Cup final of 1996 – Clarke said they would “try to keep emotion out of the game”.

That was an impossible task, with Mansfield fans holding a minute’s applause for the opposition manager.

It was a show of solidarity which Port Vale fans, who Clarke praised during the week for support shown in trying times, also took up in the eighth minute as the atmosphere at the national stadium hit an early crescendo.

Stone’s save from Murphy and Harratt’s effort off the post had the stadium buzzing before two quick goals set Port Vale on their way back to League One after five seasons away.

For Stags manager Clough, there would be no celebration on a ground where his late father Brian triumphed repeatedly with Nottingham Forest.

In his programme notes, the Mansfield boss said it would have “sounded a little bit daft” in October that his side would even be at the national stadium, having been in the relegation zone following a woeful 14-match winless run in all competitions.

A club-record 11 consecutive home league wins between 30 October and 2 April catapulted the Stags to what previously seemed an unfathomable promotion bid.

They were in the race for automatic promotion until the final day, but eventually had to settle for a seventh-place finish.

They saw off Northampton with home and away wins in their two-legged semi-final, but their miraculous rise from drop zone to Wembley ultimately would not take them on to League One.

Defeat also meant there was no storybook ending to the season for defender James Perch, who led Mansfield on to the pitch as captain just nine months on from considering retirement after fracturing his skull.