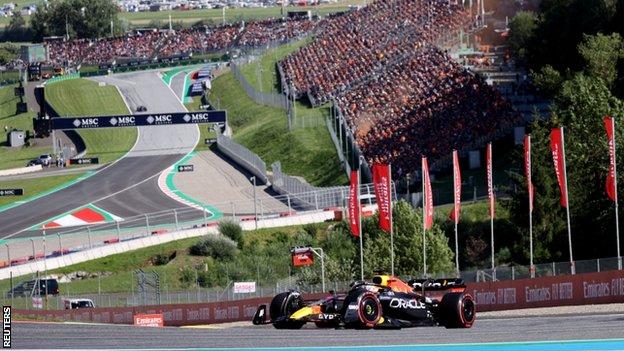 Red Bull’s Max Verstappen pipped the Ferrari of Charles Leclerc to pole position at the Austrian Grand Prix with his final lap of qualifying.

The world champion’s earlier fastest time had been beaten by Leclerc and his team-mate Carlos Sainz with their final laps but Verstappen snatched pole back.

The Dutchman was just 0.029 seconds quicker than Leclerc, with Sainz only 0.082secs off pole in a close session.

The session set the grid for Saturday’s sprint race, the result of which establishes the grid for the main grand prix on Sunday.

Verstappen, who was serenaded by thousands of fans from his home country at his team’s home race, looked as if he had missed out as he headed into the final sector of his final lap.

At that point, he was not improving his time, and ahead of him on track Leclerc and Sainz were both doing so, and both slipped ahead of him.

But Verstappen was still pushing, and although he was slower than Leclerc through the final sector, he was quick enough along with his greater straight-line speed in the first sector, to grab pole back.

On his hopes for the sprint, he added: “We have a great car. Hope it’s clean into Turn One and I get a good getaway. I feel confident with the car we have.”

Red Bull’s Sergio Perez originally qualified fourth but was later excluded from the third part of qualifying in its entirety for exceeding track limits at the end of Q2 – an offence not noticed by race stewards at the time. The Mexican will start the race in 10th place.

There are points available for the sprint – eight for the winner down to one for eighth place – and Leclerc really needs a good haul this weekend to revive his title hopes.

The Monegasque is 43 points behind Verstappen after a brutal run for him and Ferrari, in which he has lost potentially winning positions four times in five races through two engine failures and two strategy errors.

But Leclerc said only that he wanted a “clean race” after his difficult period.

“I struggled little bit with putting the tyres in the window after the red flag and this was enough give me some understeer and I struggle to drive around this whenever I have it,” said Leclerc.

“It is a shame but it is only Friday and looking at the last five races it is the Sunday that counts and I hope we can finally have a normal race.

“We just need a clean race and a good strategy on Sunday and everything is possible.”

What happened to Mercedes?

Hamilton had been looking competitive and was in contention for a place mixing it with the Red Bulls and Ferraris after setting third fastest time in the second part of qualifying, less than 0.2secs from pace-setter Leclerc.

But the seven-time champion made a most uncharacteristic mistake, losing control through Turn Seven on his first flying lap in the final part of qualifying.

Hamilton was just a little wide of the apex and he lost the rear. He tried to catch it, but slid across the gravel trap before smashing into the barrier.

The incident brought out the red flag while Hamilton’s car was recovered and the barrier repaired.

“I’m incredibly disappointed in myself,” said Hamilton. “I’m so sorry to the team, everyone worked so hard to put this car together and I never like to damage it, bring it back damaged.

“We were fighting for top three, I think. I don’t have an answer for it. I just lost the back end and that was that.”

Despite his obvious frustration, Hamilton added: “I’m encouraged for sure. I am encouraged to see our performance, we weren’t expecting to be as close as that. That’s a huge positive but I am really quite far back.

“I hope tomorrow I can make up for some lost time.”

Russell was the first driver out when the session was restarted, only for him to also make a mistake, this time at Turn 10.

The car snapped sideways as he turned in, and he slid sideways across the run-off and into the barrier. But, unlike Hamilton, he had managed to put a lap in on his first set of tyres, and he held on to fifth place – later to become fourth after Perez’s exclusion – as everyone else scrapped for position in the final two-minute shootout when the session was restarted.

It will mean a long night for Mercedes repairing both cars.

Behind Russell, Alpine’s Esteban Ocon is fifth, ahead of the Haas cars of Kevin Magnussen and Mick Schumacher, and Alpine’s Fernando Alonso, with Hamilton and Perez completing the top 10.

In the second half of the grid, there was a notable performance from Alex Albon in the updated Williams in 12th place, while McLaren were struggling.

Daniel Ricciardo was knocked out in the first session in 16th place, again struggling for pace as he has for much of the season.

Team-mate Lando Norris fared little better. The Briton made it into the second part of qualifying, but a brake problem hindered him and he could manage only 15th.