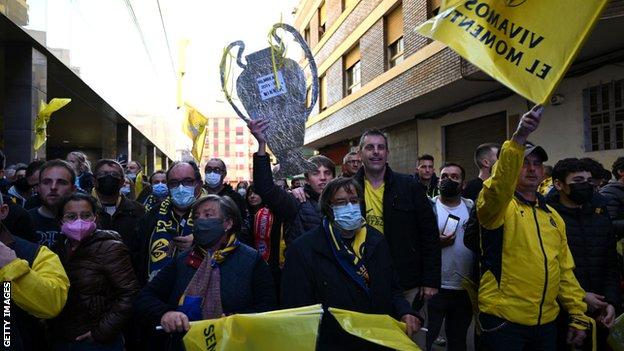 The line-up for this season’s Champions League quarter-finals contains teams from Madrid (two), Munich, Lisbon, London, Manchester and Liverpool – some of Europe’s largest and most influential cities.

There is also Villarreal, a team from an industrial city of the same name in eastern Spain with a population of 50,000 and, some might say, little right to be keeping such exalted company.

And yet a shock 1-0 win over German champions Bayern Munich last week means the Yellow Submarine, as Villarreal are nicknamed, go into Tuesday’s second leg with the chance to reach a first semi-final in Europe’s premier club competition since 2006.

But their success should not come as a surprise. Despite their size, they have qualified for Europe in 17 of the past 22 seasons.

When Marcos Senna joined the club after arriving from Brazil in 2002, things were very different. Villarreal were in only their fourth La Liga campaign and featured mostly in the now defunct Intertoto Cup.

They have since become one of the strongest sides in Spain, going on to beat Manchester United in the Europa League final last season to lift their first trophy – a landmark moment.

The club is at the heart of the city, and the 21,626 crowd that watched the win over Bayern is a figure not far off half its population.

Many of those will have entered the club’s Ceramica stadium that night through gate number 19. Or, as it has been known for a decade, the Marcos Senna gate, a tribute to one of the club’s most celebrated footballers.

A Euro 2008 winner, the Spanish-Brazilian has seen it all and argues that, unlike what others may think, playing for a small-city team can be a dream come true.

“Obviously, this is not a place for partygoers,” Senna, who currently works as the club’s director of institutional relations, told BBC Sport.

“No team wants players who are always out in nightclubs and Villarreal were so serious about that in the past that they didn’t even accept anyone living in Valencia [which is around a 45-minute drive away], so they could have some control. It’s not like this any more though – I’d say half of the squad now lives there, and I also do.

“If you come with the right mentality, this can be a very easy area to adapt to. We are close to the mountains and beaches, have incredible weather the entire year, the club are always playing in the first division, pay on time and provide everything you need.

“So you get here and you don’t want to leave. When I arrived, I didn’t plan to stay long. And now look at me, 20 years on and still loving it here.”

Unfortunately for Bayern, nothing much has changed after the Europa League title.

“It’s all the same, except for one thing: we no longer have that pressure of never reaching finals. We got there for the first time and we won it,” Senna said.

“We had been working hard and doing things well for so many seasons that football kind of owed us one. But we want more. We know if we knock Bayern out, things will get serious.”

‘None of this happened overnight’

Despite being a family-run team and having a considerably smaller budget compared to their Champions League rivals, Villarreal have managed to consistently challenge big guns from other countries over the years.

No-one had expected them to upset the odds against Juventus in the last 16, but after a 1-1 home draw in the first leg they won 3-0 in Turin.

It was arguably the best night in their European history.

They achieved it via a shrewd recruitment strategy, often signing players who have faltered elsewhere and giving them a second chance.

Their manager, Unai Emery, himself fits that mould, having been sacked by Paris-St Germain and Arsenal.

His team has a backline that combines the youthful energy of highly rated local boy Pau Torres with the experience of former Real Madrid and Napoli centre-back Raul Albiol, a European champion in 2008. In midfield, they have Tottenham Hotspur loanee Giovani lo Celso in great form and in attack they have ex-Bournemouth forward Arnaut Danjuma and last season’s Europa League top scorer Gerard Moreno.

Unsurprisingly, the Yellow Submarine have been hailed as one of the best success stories in football.

“None of this happened overnight. It’s the result of 25 years of work,” Senna explained. “It’s no exaggeration to say Villarreal were lucky to find Fernando [Roig], a great businessman who wanted to bring new ideas and create our own philosophy. We could go beyond and do some mad business in the transfer market, but that’s not us.

“Other fans say ‘Villarreal’s owner has lots of money’. Yes, that’s true, but behind all this there is a great project. You see other teams that have investors and things just don’t click. It’s not like this here.

“Fernando’s son [Fernando Roig Negueroles, the club’s chief executive] has been in charge of our transfer policy and is the most responsible for what Villarreal have become today.

“When players arrive here, they know they will be playing for a side that is always fighting for a top-six finish in La Liga, that are regularly in Europe and have an average attendance of 17,000. No fan will ever bother you and you always have that full stadium feeling. It’s quality of life in all aspects.”

Senna was a key cog in the Villarreal team defeated by Arsenal in the 2005-06 Champions League semi-final.

If they can beat Bayern on Tuesday and reach the same stage again, the former midfielder would rate their chances higher this time.

“Back then, we had a much smaller budget and also an inferior team than the one we have now,” Senna added. “When I say inferior, it’s because we weren’t covered in all areas. The current squad is more balanced in every position. I mean no disrespect to the rest of that group, but this team is stronger.

“Who would win if they faced each other? That’s a very difficult question – it would surely be a great game, but if it went to extra time and required more from the bench, the current side would do better.”